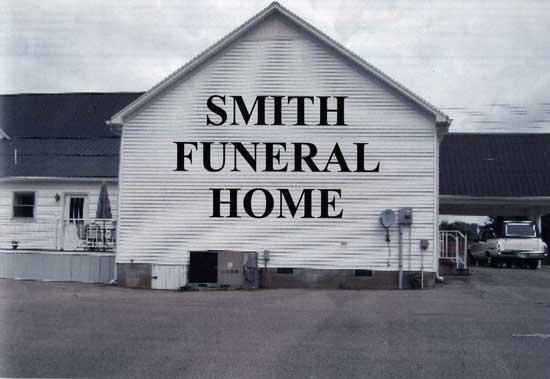 Above is an artist's rendering of the sign Smith Funeral Home proposes to place on the back of its building which faces John Bragg Highway.
The Woodbury Planning Commission discussed possible ways to make the downtown area more attractive to visitors and potential tenants during its meeting Tuesday (Oct. 20) at Woodbury City Hall.

Commission member Sue Patrick expressed concern about downtown buildings currently being used for storage, and not for retail business.

"I hate to see that we have empty buildings again around the square," Patrick said. "What can we do about those buildings being used for storage? It's just not attractive at all.

"We want retail businesses there. We don't want everybody renting those building and putting storage in them. That's what we've had and we don't want that.

"It's killing our town, these closed up business like that, and we've got to find some way to stop that from happening."

Patrick wants buildings in the downtown central business district to be used for retail businesses or business offices only.

"We don't want people storing things in those buildings, we want them open."

"What we are looking at is for a business to be open and viable and not locked up and just used for storage," Mayor Harold Patrick said.

Staff Representative Charles Brown will write up an ordinance and present it at the next meeting that a building can not be used solely for warehousing and storage.

Commission member Bill Jennings said businesses that are being used for storage should be required to have some type of screening over their windows.

In other business the commission:

• Deferred action on a request by Joe Gilly of Lehman Street on a variance to buy a portion of a neighbors property without it being surveyed. Gilly and the neighbor share a carport that is half on Gilly's land and the other half on the neighbor's land.
Gilly wants to buy the driveway from his neighbor, but can not do so without the variance. The exact lines of any transferred property must be noted and recorded in the event there is a transfer of the property to a future owner.

The commission will ask City Attorney Bill Bryson to review the requirements and bring the matter up again at its next meeting.

• Chairman James Barrett brought up the matter of there being multiple buildings in the downtown area without addresses easily or readily viewable. Members agree that it is important to have addresses displayed so that citizens and emergency responded can locate them more quickly. Brown will prepare an ordinance for discussion and possible action at a future meeting of the commission.

• Heard from Tim Gentry of Smith Funeral Home on Old Murfreesboro about plans to construct a large sign for the business on the back of their building that faces John Bragg Highway.

The building is currently zoned residential because at one time it was a house. In order to place the sign on the rear of their facility, the business will require a zoning change to Commercial 3 (C-3). It is currently being taxed as a commercial business, Gentry said. He said the sign would not be illuminated on its own.

The sign with have a total 106 square feet. The letters comprising the sign with be 30-inches in length. Gentry will apply for a rezoning request from the city and the matter will be discussed at the November meeting.

• Mayor Patrick gave the commission updates from the city. He said The Scoreboard Restaurant has been approved for a beer permits and that it plans to open in about two weeks. He said that he had learned D.J.'s Restaurant has started to serve beer under its permit.

There has been no word on the town's application for a grant to build a new fire hall, and that he was disappointed it had not come yet. Patrick said he had hope to receive information on the decision in late September.

Print
Members Opinions:
bh123424
[Delete]
I think Ms Patrick is on the right track. I grew up in Woodbury and visit 2 or 3 times a year. It isn't my intention to be critical of the downtown area, but the closed buildings, the buildings used for storage, and the bail bondsmen’s establishments doesn't make Woodbury look like an appealing place to visit.