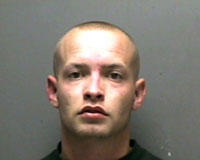 DAVENPORT
A Woodbury man accused of attempting to run over three deputies with a tractor was charged Friday with three counts of aggravated assault, a sheriff’s supervisor said.

Suspect Christopher Nathan Davenport, 23, of 995 Hoover Mill Road in Woodbury was charged with assault of Cpl. Ryan Huggins and Deputies Matt Clagg and James McFerrin when they tried to apprehend him for tearing up yards while driving recklessly on a stolen tractor on Baxter Road, Sgt. Chris Kauffman said. The deputies were not injured.

Huggins reported the three deputies responded to a 911 call of a man recklessly driving the tractor. They located the man on the tractor, identified themselves as sheriff’s deputies and ordered him off the tractor at gunpoint.

Deputies identified the man as Davenport. While arresting him, they found he carried marijuana and prescription drugs Oxycodone and Lortab.

Kauffman reported the investigation showed Davenport drove the stolen tractor to Daryl Chummley’s home on Baxter Road where he allegedly entered the barn, removed a Honda motorcycle and attempted to move a four-wheeler.

Huggins and McFerrin charged Davenport with additional charges of theft of property over $10,000, evading arrest, vandalism, attempted theft, possession of Schedule II, III and VI drugs and resisting arrest. Davenport is being held on $168,000 bond at Rutherford County Adult Detention Center. A hearing is set Jan. 10 in General Sessions Court.