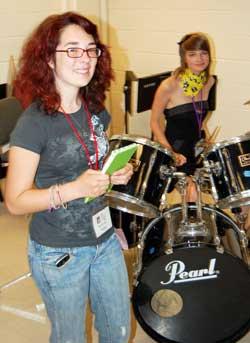 Savannah Bailey, left, works on her vocals, while Ruby Jazz perfects her drumming style at the Southern Girls Rock & Roll Camp, which was held last week at Middle Tennessee State University. Both live in Woodbury and are juniors at CCHS.
Seventy-five girls from ages 10 to 17, including two Cannon County High juniors, spent the past week grooving to their own kind of music at the eighth consecutive Southern Girls Rock & Roll Camp (SGRRC).

Sponsored by Youth Empowerment through Arts and Humanities, the day camp ran Monday-Friday on the Middle Tennessee State University campus and concluded with a showcase Saturday night at Siegel High School by bands the girls had formed during the week.

"I would like to think that I could be a singer, but mostly I came just for fun,” said vocalist Savannah Bailey of Woodbury, 16, a junior at Cannon County High School. "I’ve learned that you have to be open and out there with your ideas."

Bailey has already performed with a rock band, Tilrion, which includes her brother, at three music showcases

"I think it’s a lot of fun," said drummer Ruby Jazz, 16, also a CCHS junior, who returned to camp for her fifth year. "I learned a lot of new beats. I’d guess I’d like to be in a band, not professionally, but for fun.”

The camp aims to create a positive atmosphere of collaboration and self-esteem. The girls attended workshops in recording, screen printing, “herstory” (the history of women in the music industry) hip hop performance and theory and photography. They also received instruction in guitar, vocals, keyboards, bass, electronic music, songwriting and drums from professional musicians.

“So far it has been controlled chaos. We like to have a lot of fun but keep it in check so that girls can come away with something,” said Nicole Tekulve, director of the SGRRC, on Tuesday. “It’s not a traditional school classroom environment. We like to keep things a little loose.

“In the afternoon they will spend an hour practicing in the hallway, work on their songwriting, strum guitars not plugged in and work on their band name. The second hour they will go into a classroom and practice playing.”

Tekulve said that about two-thirds of the girls were from Murfreesboro or nearby. Besides Tennessee, aspiring rock musicians came from Alabama, North Carolina, South Dakota, Minnesota and Pennsylvania. Cost of camp was $225 to $250

“I came last year. I wanted to learn a new instrument, definitely, and come see my old friends from all over the U.S.,” said Hope Johnson, 12, an eighth grader at Mt. Juliet Middle School who plays 10 instruments. “I love music and I like having the band and enjoy the whole teamwork thing at a college. It makes you feel like older.”

The SGRRC was founded by Kelley Anderson in 2003.

“She was inspired by a similar camp in Portland, Ore., the Rock and Roll Camp for Girls,” Tekulve said. “She went out there and volunteered time at that camp and came back to MTSU where she was a student and realized our community needed a similar vehicle for girls to help build positive self esteem through music. She is a touring musician now.”