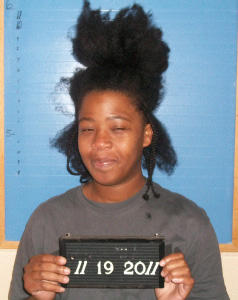 JULIA COPE
Cannon County Sheriff’s Deputy Travis Turney observed a white Buick pass his patrol unit on the shoulder of the highway on West Main St. in Woodbury on Nov. 19.

Deputy Turney initiated a traffic stop on the vehicle and spoke with the driver, Julia Jeanee Cope, who seemed very agitated.

Cope stated she thought she could drive on the shoulder and that the deputy’s reason for stopping her was "(B.S.).”

While running a check of Cope’s license, it was found to be revoked.

Deputy Turner returned to the vehicle to advise Cope she would be issued a release citation and that she could place a phone call for someone to pick up the vehicle.

Cope then became more agitated and began throwing things inside the vehicle, according to the incident report.

The deputy allowed Cope to use his mobile phone to call someone about picking up the vehicle. She then turned her radio up to a very loud level and became combative.

Deputy Turney asked Cope to turn down the radio and she stated the “whole thing was (B.S.)” and that the deputy was a (two-word expletive censored).

By that time Sgt. Randy Neal had arrived at the scene to provide backup support. When Cope was asked if she had anything illegal in the car, she stated she “didn’t have any (crapola) in the car” and that deputies could not search her vehicle.

At this point Cope’s parents had arrived on scene and parked behind the patrol units. Cope threw the door open on her car and began cursing loudly in the roadway. Deputy Turney attempted to calm the situation, but without success.

Cope then ran from the scene and got into her father’s vehicle. Deputy Turney then advised Cope she was being taken into custody for her actions. Her mother was advised she could take possession of her daughter’s vehicle.

Cope, of 126 Gassway Rd., Woodbury, was then transported to the Cannon County Sheriff’s Dept. where she was issued warrants for Disorderly Conduct, Driving on a Revoked License and was also issued a citation for Improper Passing. Bond was set at $1,300. Initial court date is Dec. 6.