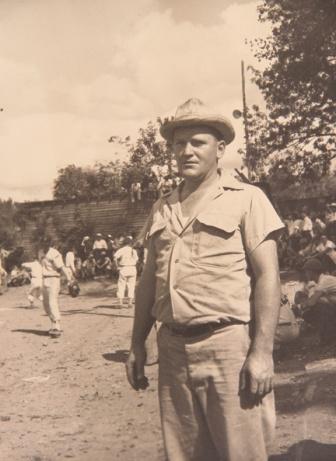 Dude Northcutt during his baseball days.

Say 'Dude' in Woodbury, and most everyone knows you're speaking of Nolan 'Dude' Northcutt, a man whose life has spanned the centuries, dating back to when most rural communities had popular amateur or semi-professional town baseball teams.

And town team communities of the 1930s-40s-50s-60s, didn't have to be big enough to be incorporated, as in Walter Hill, Lascassas, Gassaway, Milton, Christiana and Short Mountain.

Little Readyville community that straddles Stone's River, the boundary between Rutherford and Cannon counties, is a case in point.

"We (Woodbury) finally managed to beat Readyville's great team, but we never defeated Auburntown's team that featured so many players named Gaither," Mr. Northcutt noted at age 98. "Nearly every position on the great Auburntown teams, were Gaither boys who were very tough outs to get."

Plans call for Mr. Northcutt to be recognized at the Rutherford County Old Timer's Baseball Reunion scheduled for Feb. 11, 6 p.m., at the Jaycees Building in Murfreesboro's Cannonsburg Village.

"We'll socialize at 6, have dinner at 7 and then hear our featured speaker," noted Old Timer's spokesman Truman Jones, a former sandlot player of youth.

"I wasn't that good of a player, so I managed the team for many years here in Woodbury," said Mr. Northcutt. "I was replaced as the volunteer manager by Harold Patrick, who serves today as the distinguished mayor of Woodbury."

"Mr. Dude Northcutt did as much as any volunteer citizen for our community's youth than any man in history," chronicled Woodbury Mayor Patrick.

"All old timers in the region who played on community baseball teams are welcome," noted Old Timer's spokesman Truman Jones. "Our guest speaker this year is MTSU's Blue Raider Coach Jim McGwire. "We always have a great time…recognizing and remembering the great amateur and semi-pro baseball teams of the past."

Attendance averaged from 50 to 200 fans that witnessed the games played most often on Sunday afternoons, Mr. Northcutt recalls.

But he recalls having more than a thousand fans in the stands for a special game in the late 1940s.

"That's when famous Grand Ole Opry stars Bill Monroe, Lester Flatt, Grandpa Jones and David 'Stringbean' Akeman came to town to play against our team," Mr. Northcutt recalled. "I don't remember the score playing against those famous Opry stars, but I remember we had more than 1,100 people in stands…and raised $1,100 through ticket sales.

The Old Timer's Baseball Reunion has been held annually more than 45 years, dating back to when a Murfreesboro banker was credited with promoting the tradition.

"The driving force was (the late) Sam Lasseter, who headed Commerce Union Bank in Murfreesboro," deposited the late Dr. Thomas Gilbert Gordon Sr., who grew up playing town team baseball in Rutherford County in the 1930s, before establishing himself as a well-known physician in Tampa, Fla.

Dr. Gordon noted a particular playing field in his self-published book in 1990 about regional town teams: "Bob Martin's Country Club Park, on Highway 231 south of Murfreesboro, was where some of our bigger games were played back in the 1930s."

When not playing first base for Lascassas, Howard Penuel managed the Greenvale (unincorporated Wilson County village) baseball team in the 1930s.

"Howard would make the contracts with other teams to play the games, and provide the transportation to and from away games," penned the late Jack Penuel in an account he gave to the Old Timer's Hall of Fame back in 1989.

"The Lascassas Picnic was the big day of the summer," Jack Penuel penned. "We had barbecued goat and lamb."

Penuel referenced one regional player who went on to play professionally: "I remember very well the time Billy Rion, Gilbert Gordon and myself went to Auburntown, and played for Mr. L.L. Lynch, the manager of the Murfreesboro White Sox team. Auburntown had Charlie Gassaway, who made it in professional baseball, pitching for them. I believe they beat us 3 to 2."

Players of yester-year could "bank" on Mr. Lasseter for organizational support.

"As head man at the bank, Mr. Lasseter offered the bank's lobby as a suitable place to display the plaque which would carry the names of those elected to our Old Timers Hall of Fame," Dr. Gordon diagnosed.

"Currently, at each reunion, we've averaged from 100 to 150 old timers coming and reflecting back on their batting averages and ERA," Truman Jones noted.