What If You Gave A Party And Everyone Came? 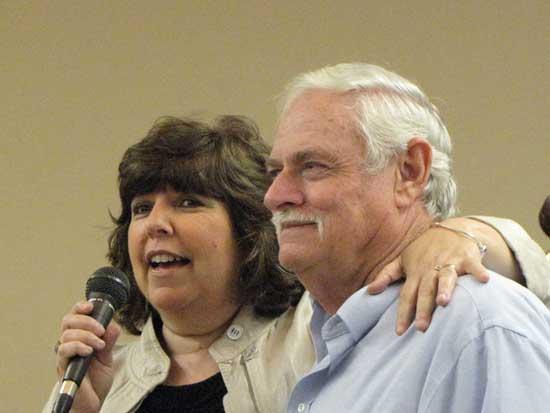 Rhonda Tennpenny and Bernie Brazle.
I have always advocated that your birthday was solely yours. Even though there are plenty of people that have the same birth date as yours, it is still yours, your story and your day. One Woodbury man has taken it to a new level for the third time; he threw himself a party and everyone came.

Bernie Brazle turned 70 years old this past week and is bringing back a tradition that he and his family and community did back when he was raised in the Turkey Branch area of Cannon County. They celebrated life, pure and simple. Bernie tells me that the community got together often to celebrate and fellowship together.

He remembers everyone fencing off an area in the field and set up tables with food galore. He also remembers his brother Ray and him sneaking under the table and reaching their arm up and getting some chicken off the plate before everyone starting eating. Several times he said they did get caught.

Bernie Brazle was borne into the Braswell family; Ray Braswell is his full brother. The story goes as this; “when Doctor Henry Bratten assisted in my delivery he made out the birth certificate, says Bernie, and spelled the last name as it sounded, Brazle, my parents never knew the difference and when we found out it was too much trouble to get it changed, so we kept it that way.”

Bernie says his immediate family spells it like he does, but all of his siblings and cousins spell it as Braswell. His brother Ray is the maintenance man for the school system and most people know him. “My dad gave the doctor two dollars and a mess of beans for his participation in the birth,” say Bernie.

Three years ago after he retired Bernie had an idea to have a celebration that would bring people together for a night of fun, so he started asking his friends and family to come and make it something to remember. He asked Teresa and me to come help celebrate, and I have to confess I thought it a little odd that someone would ask me to come to a birthday party that he was throwing for himself. Usually it is someone else throwing a party for the honoree. But to Bernie it gives his friends and family a night to get out and fellowship with each other at his expense. We loved it, and so did everyone else.

It was a great night for a party and dinner; most people who came brought a dish to share. There was food everywhere at the Senior Center. The band “The Cast Iron Skillet” was playing and Rhonda Kay Braswell Tenpenny was the lead singer. I closed my eyes and I’ll swear it was Tammy Wynette singing "Stand by Your Man," plus a host of favorite tunes that any couple could line dance to or slow songs that you can hold your favorite girl tight and pretend that you are the only ones on the dance floor. And ladies, Adam Melton can surely dance, if you ever need a partner.

Everyone had a good time whether they were participating or just sitting and listening to the good music. There were people there that I had not seen in a long time. Ovie Hollis, my favorite biscuit maker of all times also celebrated her birthday that day. Two of her brothers were there, Joe and Jackie Rogers and Myrna. They appeared to have a good time catching up with people they haven’t seen in a while.

A multitude of the Braswell family was there to help in the celebration. Bernie was asked what he wanted for his birthday and he told them “only to see your smiling face come through the door.”

One member of the band that was there was the son of Carl Tipton, Joe Tipton on the acoustic guitar and mandolin. Carl’s widow Sophie was there along with her sister Louise, both Louise and Sophie were part of the Carl Tipton Show.

The rest of the band members were father and son Billy Taylor on upright bass and Brandon Taylor on drums and Randy Gower on the keyboards and on lead guitar was Fred Duggin. The singers were of course Rhonda Tennpenny and her daughter Rachel and Rhonda’s sister Sandra Woodside, They were something to see and hear and if you ever have a chance to see them, do it they will inspire you.

From the sign in sheet there were over 200 people who had attended the birthday event. And I believe it will be a blast next year. Happy Birthday Bernie, and thank you for the party.