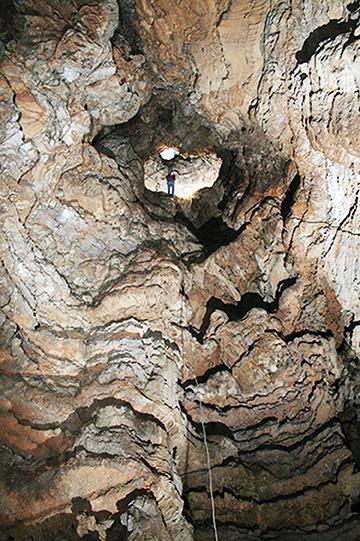 Have you ever heard of the Devil's Hole?

Exploring Devil's Hole isn't a game and there's not much to see unless you are properly equipped and capable of rappling some 110 feet straight down ... and then to climb back out.

Several years ago, two friends of mine heard about Devil's Hole and decided to descend into the cave. He went first only to discover the climbing rope they were using wasn't long enough to reach the bottom. She wasn't strong enough to pull him out and had to seek help to pull her hubby out of the Devil's grip.

He survived his trip, but that ended their caving adventures for quite a while.

My first trip to Devil's Hole happened years ago as my now late cousin Urby Daniel and I walked about three quarters of a mile up the steep hill side which was covered with underbrush and limestone outcroppings.
The walk was interesting, hearing his stories about his days on the farm including plowing that rough hillside. The hillside instead of being covered with a corn crop was turning back to a forest complete with underbrush and saw briars.

Urby picked up a loose rock as we approached a low mass of limestone. That pile of rocks marked the opening to the Devil's Hole. Needless to say, neither one of us got very close.

"Listen," he said, tossing that big rock into the hole yawning before us.

Long moments passed before we heard the rock bouncing against the side of the cave. The pings and echoes were eventually replaced by silence.

That certainly got my attention.

To fall into the Devil's Hole would mean sure death.

One of the many tales regarding the cave revolves around a boy who was dared to jump across the narrow opening.

He lost his footing but his breeches leg caught on a stob and kept him from falling in. The youngster had to hang head first over the 100-plus-foot hole until his friends pulled him out.

Urby warned, "Don't fall in there, because I sure couldn't climb down and bring you out."

The mouth to Devil's Hole is located in a group of limestone outcroppings that stand only 15 to 24 inches high. At its widest, the opening measures about four feet and it roughly shaped like a crescent. At the time, a large rock blocked the middle of the opening.

Urby said local history says that someone rolled that rock down the hill and into the mouth of the cave.
Years ago, when Daniel was principal of Short Mountain School, he was approached by a man from Indiana about the site of the cave. The man and his two sons wanted to explore it.

He couldn't join them because of his responsibilities at the school, but he told them where to find it. He asked them to return to the elementary school and tell the students what they discovered.

The men agreed and returned to the school to give the youngsters a report on their discoveries.

They lowered themselves down by rope, Urby said. The spelunkers described the cave's opening as funnel shaped. After the opening the cave narrowed before flaring out as it reached the floor.

At the cave's base there was a large pile of rocks, tree limbs and other debris thrown down by visitors to Devil's Hole.

The vertical drop opened on a large room, measuring about 30 or 40 feet by 50 feet. The cave room had a ceiling some 30 feet high.

Air inside the room was fresh and there was a slight breeze, Daniel said. But the cavers failed to find another entrance. They did find a small snake which apparently entered the cave by the undiscovered entrance.

Unfortunately, the explorers failed to find any evidence supporting some of the wilder legends dealing with the Devil's Hole.

One of the legends dealt with a resident of the area who had disappeared. Reportedly, the missing man was killed and thrown into the cave.

Another story claimed a screaming woman was thrown into the Devil's Hole by her husband.

Urby had to laugh when recounting those tales. After walking to the cave, it would be hard to believe anyone could carry a body up the mountain. Just burying it would be a much more believable alternative.

However, one story about a nearby cave is apparently true.

Known as Jack's Cave, it's the more traditional type of geological phenomenon. The small cave opens on the side of Burger Mountain. It has an entrance about four feet high.
This story comes from the late Mag Purser.
"A dog chased a fox into Jack's Cave and came out on the other side of the mountain at a cave on the Sam Dinby place."
The dog's trip was a long one, lasting weeks or months. When he emerged from the cave, the dog was weak -- nearly starved to death from his long underground ordeal.

"His claws were worn down and his fur was worn-off in spots, Miss Mag recounted.

Miss Mag, despite living nearby, was one of the many Short Mountain area residents who never visited Devil's Hole.
"I've never gone there and I never want to," she laughed. She was 92 years old at the time.

Joe Preston was another area resident who visited Devil's Hole many times.

During his younger days, the cave was almost a tourist attraction. People would go to Devil's Hole on Sunday afternoon and meet with friends, take photos and do that sort of thing, Preston said.

And for some reason or another, the area surrounding the cave became a meeting place for church groups, especially the Seven Day Adventist church. They would meet there and hold services.

Urby Daniel said it was a particularly popular place for young men of the church, who camped there and played music at night.

"They didn't have a band, but some of the young men had bugles." On quiet country nights, the music could be heard for miles. No doubt frightening children in the area.

During the Civil War, Short Mountain was indeed a frightening place due to conflict between Union and Confederate guerrillas.

Legend claims the infamous guerrilla leader, William Quantrill maintained a camp on Short Mountain. While it's doubtful that ever happened, the mountain was a hotbed of activity during the Civil War.

A more accurate tie can be established with the name of Hiram Taylor "Pomp" Kersey who lived and died near Short Mountain.

Feeling that his home was unprotected from Federal guerrillas, his mother's home had been raided, he up and walked away from the war on 4 August 1863 and returned to the Short Mountain area. He was 15 years old at the time.

Here he gathered about a dozen others who thought as he did and became a celebrated leader of Confederate irregulars, known as the 'Short Mountain Bushwhackers', that protected Confederate families.

They appear to have operated mainly in DeKalb County, with Smithville and Liberty receiving most of their attention. (This band numbered 10 to 15, with some as young as 13. Also he might have been joined by his brother Calvin, also a member of the 16th Tennessee, who deserted 14 October 1863.)

The band was caught sleeping, on the 24 July 1864, two escaped, five were killed in the first volleys, another killed while trying to escape. Kersey tried to mount his horse, but halter was tied. A Lieutenant Thomas Bratten put his rifle against Kersey's back and pulled the trigger, it failed to fire.

Kersey jumped into the bushes pulling out his pistol but was shot simultaneously by Bratten and Captain William Hathaway.

Hathaway and his men stripped the clothing from the dead Kersey and loaded the bodies of him and his men on an ox cart and paraded them through Liberty.

I have heard them that saw it say it was a gruesome sight, the hot July morning sun on those dead bodies, their legs and arms hanging nearly to the ground, wrote Miss Mary Hall in the July 28, 1950 edition of the Cannon Courier.

"Saddest of all was the mothers and sisters of the boys, begging for the bodies of their loved ones," Miss Hall wrote.

Kersey's body was publicly displayed in Liberty, and along with his men, was buried at Daniel Smith's farm, Liberty.
His remains were exhumed from the original resting place after the war by friends and relatives and reburied in Melton Cemetery near Short Mountain, Cannon County.
His tombstone reads:

and was murdered near Short Mountain July 24, 1864

Preston researched the story of Pomp Kersey extensively and ultimately placed a concrete marker where the Confederate irregular met his end near Short Mountain.