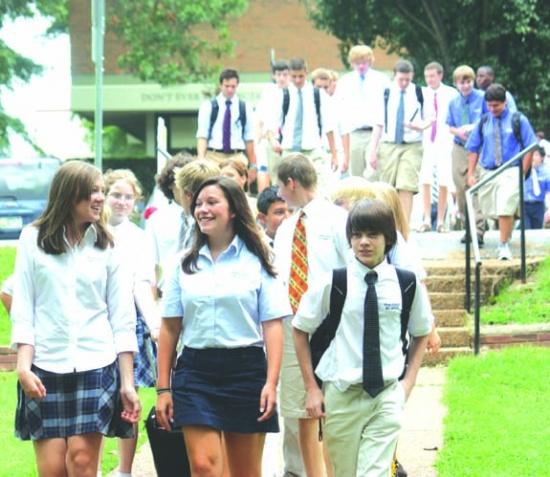 Students at The Webb School head to their classroom following the morning chapel/assembly. Monday, Aug. 16 marked the first day of the 141st school year at Webb, an independent college-preparatory school for grades 6-12.
The first day of The Webb School’s 141st year began with a rousing chorus of the school hymn “Integer Vitae,” a reading of school founder W.R. “Sawney” Webb’s favorite Bible passage, Psalm 1, and an address by the incoming head of school.

The Webb School is a top-rated college-preparatory independent day/boarding school located in Bell Buckle, Tenn. The school’s focus is on academic excellence and character development.

According to Director of Operations in Admissions Matt Anderson, a significant number of new students are attending The Webb School this year. The number of new day students from Bedford County (15) and neighboring Rutherford County (21) both increased slightly compared to 2009 figures, despite ongoing economic pressures. Additionally, 31 new boarding students joined the school community. In all, there are a total of 80 new faces on campus.

The struggling economy has been a hurdle for families contemplating an independent school education for their child(ren), Anderson said. Webb provides financial aid packages for qualifying families, as well as merit scholarships for boarding families.

“Regardless of aid packages, families are still having to significantly reprioritize their finances to afford a Webb education,” he said. “It’s definitely a stretch for most of them. The fact that they are making this sacrifice is to me the highest compliment for our faculty, curriculum and programs.”

During the Monday morning chapel service opening the 2010-11 school year, incoming Head of School Raymond Broadhead, who began leading the school on July 1, shared with the students his vision for the school, beginning immediately with a renewed emphasis on environmental conservation.

“There will be no more Styrofoam cups at lunch,” he said. “It’s our duty as citizens to do what we can for the environment … I want Webb to become a leader in environmental sustainability.”

Additionally, Broadhead has formed a Conservation and Aesthetics Committee that will work to ensure Webb’s campus remains attractive, while supporting recycling and other “green” efforts.

He also shared his preliminary ideas for a long-term strategic plan, currently under development with the Webb Board of Trustees. According to the head of school, the plan will likely include improvements to Webb’s facilities.

In summary, Broadhead reminded the students of Sawney’s final words from his deathbed, as published in Lawrence McMillin’s book, “The Schoolmaker,” and urged them to heed the timeless advice.

“Give my boys (students) my love and tell them to lead a large life. A large life is no mere piffle, but one that makes the world better because you have lived. If the world is better because of you, you are a wonderful success. If it’s worse because of you, you are a miserable failure. When you come to the end, you will find that the only things worthwhile are character and the help you’ve given to other people. The first step in the development of character is loyalty and obedience to your parents, your teacher and to God. And don’t forget, don’t do anything that you’ve got to hide.”