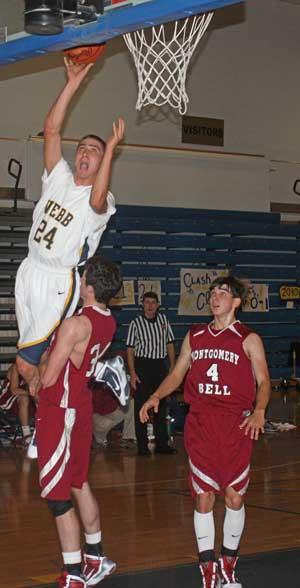 Hunter Foutch, a Webb senior, goes up for a lay-up Friday, Dec. 4, as opponents from Montgomery Bell Academy attempt to block him from the basket. Webb lost 50-70, but Foutch scored his 1000th career point during the fourth quarter of the game.
Hunter Foutch of Liberty, Tenn. achieved a much sought after goal in high school basketball Friday night.

At The Webb School’s home game against Montgomery Bell Academy the senior sank his 1,000th career point. In fact, Foutch scored 11 points during the game, putting his total points earned as of Friday at 1,001.

“It’s kind of a benchmark (1,000 points),” said Jeff Mitchell, Webb athletics director and head coach for the varsity boys’ basketball team. “That’s a pretty good career if you can get there.”

Webb lost the game to MBA (50-70) but that didn’t dilute the feeling of elation for Foutch, who has played for Webb since his freshman year.

“It’s exciting,” he admitted. But the senior credited his team with the high mark as well. “It’s not just my award,” he said.

Foutch said the 1,000-point goal crossed his mind as a freshman, when he was recruited early on from junior varsity to play with the varsity team.

“I didn’t get to play a lot my freshman year, but I thought if I just play more it could happen,” he said. “I wanted to do well as a team more, but I had my own personal goals too.”

Webb’s varsity boys’ team has done well. They made it to the regional playoffs the last two years and Foutch is hoping they’ll go farther this year.

“I would rather the team go to state (than be recognized myself),” he said.

Foutch, a forward for The Webb Feet, has played both guard and forward positions over the years. He started playing at Dekalb County Middle School, but honed his skills after transferring to Webb in the 9th-grade. He averages about 18 points a game and scores most of his points from inside the key.

“I don’t get many three-pointers,” he said.

According to his coach, Foutch has been an excellent player and teammate.

“He’s just a great kid,” Mitchell said. “He’s very athletic and very dedicated to the program. He lives an hour away and he’s missed very few practices and workouts over the years. He’s just a quality, quality kid and he’s had a really nice career.”

Mitchell presented Foutch with a game ball and recognized his achievement Saturday afternoon just prior to Webb’s home game against St. George.

Foutch is the son of David and Kim Foutch of Liberty, Tenn.