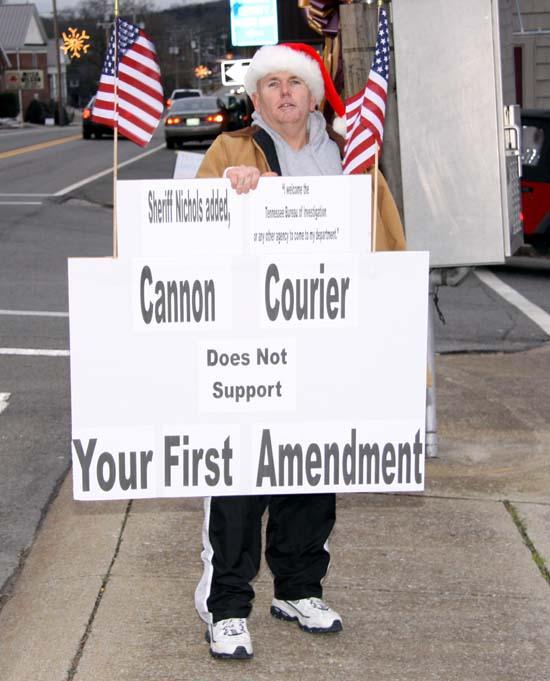 A reader of our Web site displayed the sign above as he walked along Main Street near the Cannon County Courthouse Saturday afternoon.

Reader "PurpleHaze" is upset because we would not approve his opinion submitted to an article on our site which stated that there is "corruption" at the Cannon County Sheriff's Dept.

We did approve his opinion which stated there is "alleged corruption" at the sheriff's department.

Our view is that unless and until there is proven to be any form of corruption at the sheriff's department, people can only have an opinion that there is, which does not make it factual or accurate.

PurpleHaze contends that the First Amendment affords him the right to express any opinion he wishes, whether it is factual, or not.

We disagree, which is the cause of contention and the reason for the sign.

PurpleHaze is entitled to his opinion about our policies, and we are happy to afford him this venue to express them.

Print
Members Opinions:
PurpleHaze
[Delete]
After 5 attempts to express my OPINION.The editor finally TOLD me what I could post as MY OPINION. try posting your on their web site.. It ain't easy!

Nina76
[Delete]
Sorry to say, but if you are a frequent viewer of our Nashville Television stations, you will have observed pretty much every county in middle Tennessee has been focus of some sort of corruption with in their law enforcement departments. This is not an opinion, but a fact. Do your research!
CannonCourier
[Delete]
In this instance, pertaining to the events this week involving persons employed by the Cannon County Sheriff's Dept., any research would reveal that to this point neither the TBI, U.S. Dept. of Justice, FBI, DEA or any other state or federal agency has as yet asserted or demonstrated that any form of "corruption" exists in the local sheriff's department. Therefore, it is only "alleged" and does not constitute fact. We find it both hard to believe, and puzzling, that persons would encourage us to publish information which is not known to be fact.
PurpleHaze
[Delete]
Editor, this will be last attempt to see if you truly understand the definition of opinion.

An opinion is a belief that cannot be proved with evidence. It is a subjective feeling and may be the result of an emotion or an interpretation of facts; people may draw opposing opinions from the same facts.

If your paper was to report that purplehaze was a thief, then yes you could be held liable.

But if one of your readers were to click on the opinion button at the end of every story and state that purplehaze is a low down bottom of the bucket piece of cow dung, that would be fine. How could you be liable for that?
That is there opinion of me and everyone has a right to their own opinions.
Your policy of not posting readers true OPINIONS is nothing less than censorship.

If you not want to encourage your readers to post their opinion then remove that option.

Once again An opinion is a belief that cannot be proved with evidence. It is a subjective feeling and may be the result of an emotion or an interpretation of facts; people may draw opposing opinions from the same facts.


CannonCourier
[Delete]
PurpleHaze, this will be the last attempt to see if you understand that we will not approve posted opinions if we believe the information contained in them is factually inaccurate.

"If your paper was to report that purplehaze was a thief, then yes you could be held liable."

And, if we were to allow a reader to post that as a statement of fact in a posted opinion, we could be held liable for that action as well.

There is a difference between printing that someone is a thief as though it were a statement of fact, and alleging that someone is a thief, which is an opinion and not a fact unless and until it is later proven in court.
cobraquen
[Delete]
First Admentment right,You may express your opinion as long as you state MY OPINION IS. I applaud purple haze for having the guts to follow thru with HIS OPINION
ScarletOhara
[Delete]
In my opinion the Cannon Courier is incapapable of understanding the word and definition of opinion. If I were to say the Cannon Courier is a lame excuse for a newspaper. Does that become fact? No, merely an opinion that cannot be supported by evidence. But yet I still feel that way.
[Delete]
I am sorry but I think PurpleHaze needs to get a life! There is so much more that is going on this world. You want to make a difference in this community find a family in need and go help, visit the Nursing Home or send Christmas cards to our soldiers serving overseas. Have a Merry Christmas!
PurpleHaze
[Delete]

In response to Ben on cannoncourier.com
Just Maybe I do just have way too much time on my hands.
Lets see this year I have adopted 2 families from Cannon County DHS office for Christmas.
A couple of weeks ago I also dropped off 4 boxes of children’s toys there. I also have 2 boxes too still drop at the CCSO for their toy drive, might just have to divert them elsewhere. Back in August I transported a vehicle for a Wounded Warrior to Walter Reed Hospital and toured the facility there as well visited with many of the Heroes. I have also helped escort 3 KIA soldiers from Murfreesboro and standing outside the funeral homes during the summer heat as part of a flag line to shield the families from any type of protest that happen at such times, as well as 10+ military funerals this year as part of the Patriot Guard Riders ..
Just think of what good I could have done during the 2 hours I spent on the public square Saturday…. Just sayin .


Also a note to Kevin, this will be my last posted opinion to your paper I will keep my opinions to myself.
Print whatever you like; after all it is your newspaper. God Speed my friend.

[Delete]
Well, it seems that I should have researched the facts before I expressed my opinion about PurpleHaze. Please forgive me. I truly do hope you have a Merry Christmas!