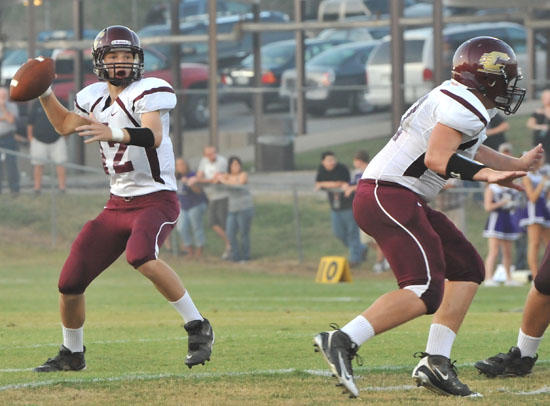 CCHS Quarterback Ryan Jordan (12) surveys the field in action against Watertown Friday. (JOEL FRANKLIN photo)
Cannon County’s 2011 High School Football season did not begin with the type of start players had anticipated as they were blanked at Watertown 41-0 in the season opener Friday.

Despite the one-sided setback Lions players believe the disappointing result is not a reflection of what the season will become.

“This is not the result we expected and it is not the way we wanted to start the season,” junior safety/receiver Justin Tobin said. “We are a better team than we showed tonight. We obviously have a lot of work todo and we have to make improvements. This was a very disappointing game.”

A throng of Cannon County fans flocked to the visiting stands in anticipation of the 2011 season but the Lions had difficulty sustaining drives on offense and getting off of the field on defense. The score was 28-0 at the intermission and the Purple Tigers never relented.

“We have a lot to learn from this game and we will have a great deal to work on during the week,” CCHS Head Football Coach Joel Schrenk said. “We have to become a better tackling team and we have to execute offensively when the opportunities are there.”

Sophomore quarterback Ryan Jordan was 14-of-26 through the air with 119 yards passing. He was guilty of one interception. Tobin led the Lions in receptions with seven for 42 yards and junior newcomer Cody Petro debuted with four receptions for 34 yards. The duo hauled in all but three of Cannon County’s receptions, while Waylon Sedtal added two receptions.

Junior Ryan McLaurine and sophomore B.J. Daniel led the Lions in tackles with 14 and 12, respectively.

The score was 7-0 Watertown after the first quarter but the Lions slowly saw the Purple Tigers take over in the second quarter when they scored three touchdowns and took a 28-0 advantage into the half.

“We have to make tackles when we are in position,” McLaurine said. “When you have players wrapped up and hit them in the backfield, you have to take them down and we didn’t. We gave up too many yards after first contact.”

Cannon County (0-1) will look to even its record when it plays host to Chattanooga Grace Baptist in the home opener Friday.