Wamp To Campaign For Governor At Joe's Place Saturday 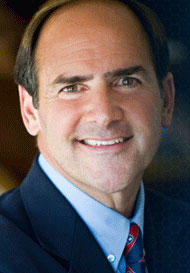 Zach Wamp
Joe's Place Restaurant is once again proving to be a popular campaign stop for candidates. Zach Wamp, who vying to become Tennessee's next governor, will pay a visit there Saturday (Dec. 12) at 4 p.m.

Wamp currently serves as a U.S. Congressman representing the 3rd district of Tennessee.

Zach will talk with Middle Tennesseans about his "20/20 Vision" for Tennessee’s future and the positive impact it will have in your area. He will be listening and learning about the priorities you believe are most important to the future of Tennessee.

Known as a dynamic and visionary leader in East Tennessee for many years, Zach Wamp is now offering his energy, tenacity and executive leadership to all Tennesseans. From education, economic development and preventive healthcare to commanding the Tennessee National Guard, Zach is ready to lead Tennessee to an even brighter future. Zach serves our nation’s veterans and active military as the Ranking Member of the Subcommittee on Military Construction and Veterans Affairs, which funds our military installations at home and abroad and resources the important benefits for our nation’s 23 million veterans.

For 10 years, Zach has served on the Energy and Water subcommittee, which oversees and funds our national missions at the Oak Ridge National Laboratory, the Y-12 National Security Complex and the replacement of the Chickamauga Lock on the Tennessee River. Over his 14 years in the U.S. House of Representatives, Zach Wamp has set the highest of standards for effective ­­representation and strong leadership.

Zach has appeared on virtually every national media outlet and has been featured in a number of national publications effectively articulating sound social and economic policy. He is widely recognized as one of the most effective communicators in the country.

A Chattanooga native, Zach spent twelve years as a small businessman and commercial real estate broker before being elected to Congress. He and his wife, Kim, have a son, Weston, and a daughter, Coty, in college at the University of Tennessee. Zach’s family actively attends Red Bank Baptist Church, where he has helped lead an adult Sunday school class for nearly two decades.