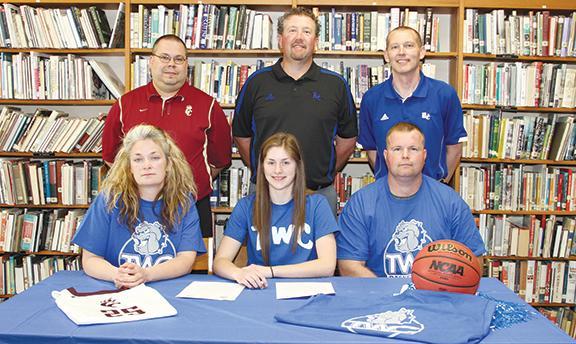 Madison Walkup showed improvement during each year of her prep career at Cannon County High School, blossoming into a first-team All-District 8-AA performer by her senior year.

Coaches at Tennessee Wesleyan believe Walkup's best basketball is ahead of her and they welcome the opportunity to be part of her continued development.

"(Walkup's) best basketball is ahead of her," said Joe Young, Tennessee Wesleyan assistant coach. "She had a great high school career, but Madison can get even better and will continue to develop, especially with her body. She can get even stronger. We like her size. She is long and lanky and big on the perimeter and those are the type of things we need.

"We know we are getting a solid kid. We like the way she plays. We like how she puts it on the floor, shoots the 3 and is a good defender."

Walkup earned first-team All-District 8-AA honors as a senior, and also earned a spot on the All-District and All-Region Tournament teams. She helped lead the Lionettes to back-to-back TSSAA Class AA State Tournament appearances as a junior and senior.

She became a member of the Lionettes' 1,000-point club during the state tournament and concluded her career with 1,006 points.

"I really felt like I fit in at Tennessee Wesleyan," Walkup said. "It is a smaller school, which is what I wanted, plus they have a great basketball program. The opportunity is the biggest thing, but Tennessee Wesleyan being so good is big too."

Lionettes Head Coach Michael Dodgen said Tennessee Wesleyan is a perfect match for Walkup for many reasons but one of the biggest is style of play.

"Madison is going into a style and system similar to what we try to do," Dodgen said. "She will get bigger and stronger. Tennessee Wesleyan is very successful and they run an up-tempo style. Madison knows how to handle that stuff and she will adapt to the college level."

"They called me after that game," Walkup said. "They started texting me and then they came to some of my games during my senior year. I really enjoyed the coaches and the players. It was the right fit for me."

Coach Young had an existing knowledge of Walkup prior to recruiting her. The 2013-14 season was his first as an assistant at Tennessee Wesleyan. Previously, he served as assistant coach at McMinn Central.

"I was an assistant at McMinn Central for years and we had played them several times," Young said. "We played them in the Substate in 2013. We played them during the regular season and at the state tournament in the 2012-13 season. She was a sophomore then and I remember telling our head coach that (Walkup) was one you need to keep an eye on back then. I got to see her, and her development, first hand. If we have a choice we love to get kids that are winners and come from winning programs."

"I played for Coach Dodgen's dad and Coach Rice has known Coach Dodgen for years," Young said. "When Coach Dodgen talks about needing to come see this girl, I trust him. Believe me, I know what it means to play for Cannon County and the expectations that come with that. They play with great energy. I love kids with that upbringing that are used to playing in big games."