Walkup To Continue Career At Maryville 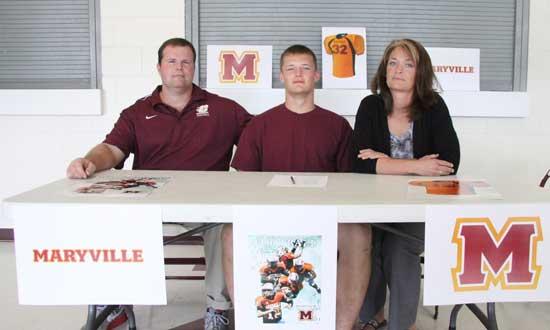 Former CCHS football star Gabe Walkup recently committed to continue his career at Maryville College. On hand for the signing were Philip Walkup, dad; Gabe Walkup and Shelley Walkup, mother.
Gabe Walkup made a name for himself as one of the top football players in District 8-AA during a stellar football career at Cannon County.

The consistent and dominating efforts he produced have enabled Walkup, the son of Philip and Shelley Walkup, to continue his career at the collegiate level.

Walkup recently committed to Maryville College in Maryville, Tenn., where he will play for the Scots, who are members of the USA South Athletic Conference.

"It's pretty exciting to know I am going to get a quality education at a great school and still have an opportunity to play football," Walkup said. "It was very important for me to go to a good school and have a chance to get a good education. This is a relief because I was not sure what I was going to do. Now I know what I'm working toward."

Walkup starred as a two-way player for the Lions, dominating on offense and defense, and he was a bright spot for the Lions during a tough campaign on the gridiron in 2010. The senior workhorse earned first-team All-District 8-AA honors after rushing for 1,080 yards to lead Lions. He also led the team in touchdowns (9) and receptions (20 for 219 yards) and he also was regarded as the team's best all-around defender from his linebacker position.

"First of all, Gabe is a great kid who worked hard and was highly successful," Cannon County Head Football Coach Joel Schrenk said. "He did everything asked of him, and more, to help lead our football program. I wish nothing but the best for Gabe. His work ethic and dedication will allow him to have a successful college career at Maryville."

Walkup is projected to play linebacker at the college level.

"It really didn't matter to me whether I played linebacker or running back or any other position, I just wanted a chance to play,"  Walkup said. "I like playing offense and defense so it is all the same as long as I'm playing."

Walkup rarely ever came off of the field during the 2010 season and his relentless and determined approach to the game was never more evident than in the season finale at Upperman. The dynamic Walkup rushed for a career-high 194 yards and four touchdowns in a 37-36 double-overtime win.

"It was a really big accomplishment to get to the playoffs," Walkup said. "We had not really been known for football so that was a great accomplishment. I hope we were able to lay the foundation for more football success in the future."

Walkup enjoyed a successful high school experience but the memories and moments shared with teammates and classmates rank at the top of the list, he said.

"The thing I enjoyed most was my teammates," Walkup said. "I really liked being with those guys. I love them. Those are good guys and I enjoyed being around them."

Maryville College football, under the direction of Head Coach Tony Lerulli, has a rich tradition. The program has produced 46 All-Americans and played in the inaugural Tangerine Bowl (known today as the Citrus Bowl) in 1947. The Scots produced 11 All-Conference performers and set several team and individual records in 2010.