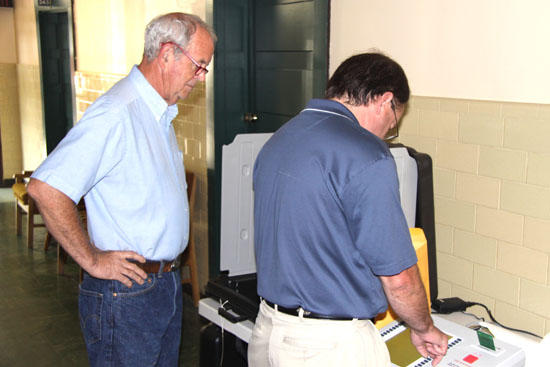 Cannon County Administrator of Elections Stan Dobson watches as machine technician Fred Fann checks out a voting machine Tuesday.
Cannon County has the second highest number of candidates on the ballot for the August 5 General Election and State Primary in the state of Tennessee, so it is especially important that all voting machines to be used in the election are in proper operating and working order.

To that end, two machine technicians — Fred and Glenn Fann — are spending many hours today at the Cannon County Election Commission Office doing a complete trial run, testing the machines and their output as though it were the actual election.

The machines are the actual ones which will be used in early voting and on election day.

In other election news, there will be a meeting of the election commission tonight at the Cannon County Courthouse beginning at 5:30. Citizens and candidates are encouraged to attend to ask questions or express concerns about the election.