Vinson: The Witch of En-dor 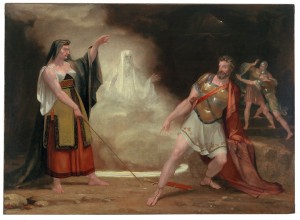 Saint, sinner, rich, and poor, all walks of life tend to be intrigued by those elements associated with the DARK SIDE: witches, warlocks, ghosts, goblins, things that go "bump in the night."

The yearly celebration of Halloween--pagan ritual or merely a fun night for children and adults?--raises "intrigue" to an attractively unsettling new height. Allow me to share with you a story I find most intriguing.

As though dealt an unfair hand by Fate, the Biblical story of King Saul, first king of Israel, has to be considered a classic tale of irony. Handpicked by the Almighty/God, anointed by Israel's greatest prophet, Samuel, Saul ultimately fell from the pinnacle of grace, literally, onto his own sword, a tragic suicide to say the least.

The prophet Samuel, King Saul's liaison to the Heavens, had died, and the Almighty, jaded by Saul's habitually self-serving, stubborn ways, had turned a deaf ear to the king's prayers. Still, Saul found no relief in his consultations with other prophets, nor from the practice of U'rim, in which an oracle (High Priest) would reveal whether a planned maneuver was condoned by the Almighty.

Also, the war with the arch-enemy Philistines raged, and the Philistines had the upper hand. That war, coupled with these other pressures, had reduced the once-mighty Saul to a spiritually desperate man.

Some time back, following standards set forth by the Almighty, King Saul had issued a decree outlawing the black arts: "wizards," and "those who hath familiar spirits" and "peep and mutter." However, as desperation erodes mental capacity, Saul prodded one of his confidants to seek out for him such an individual, someone who could peer into the future and foretell what was in store for him as king, as well as the eventual outcome of the conflict with the troublesome Philistines.

The confidant reluctantly told the king, "Behold, there is a woman that hath a familiar spirit at "En-dor."

So, King Saul donned a disguise and, with two confidants, under the cloak of darkness, went to a cave located in En-dor, where dwelt this witchy woman. Once there, Saul approached the witch, saying, "I pray thee, divine unto me by the familiar spirit, and bring him up whom I shall name unto thee."
On guard, the witch proceeded to inform Saul and the other two that the King of Israel had outlawed such practices and to grant such a request could result in her own death. Saul assured the witch no harm would befall her, so she, plying her dastardly trade, asked, "Whom shall I bring up to thee?"
Replied King Saul: "Bring me up Samuel."

As a cloud-like form manifested itself, the witch, now wise to the ruse, thus filled with dread, cried out, "Why hast thou deceived me? For thou art Saul"
Caught red-handed, Saul assured the witch she was in no danger. He then asked, "For what sawest thou?" The witch replied, "I saw gods ascending out of the earth." Convinced the apparition was the spirit of the departed Samuel (more likely an angel from Satan's army), Saul began communicating with the spirit, and the spirit informed the king of his gloomy future: "Tomorrow shalt thou and thy sons be with me." As the "wages of sin is death," King Saul, indeed, left this world paid in full.

Over the course of the past couple weeks, stores across America--the world--have experienced increased sales in pumpkins, an assortment of candies, costumes, and masks.

Come Halloween night, a.k.a. "All Hallows Eve," Saturday, Oct. 31, 2015, SUVs and mini-vans, driven by well-groomed yuppies, will creep down the streets of upper-class neighborhoods, and groups of children will emerge from the vehicles and excitedly dart from one house to the other, doorbells-a-ringing!
Emotionally standing on pins and needles while the kids roam the streets, the parents will be physically checking for the same when the youngsters return with their treats.

Regardless its true origin, the theme of Halloween, in this modern age, is meant to induce a degree of "fright." Well, readers, I find nothing more frightening that than the Old Testament story of King Saul communicating with a witch at nighttime inside a dark cave in En-dor!