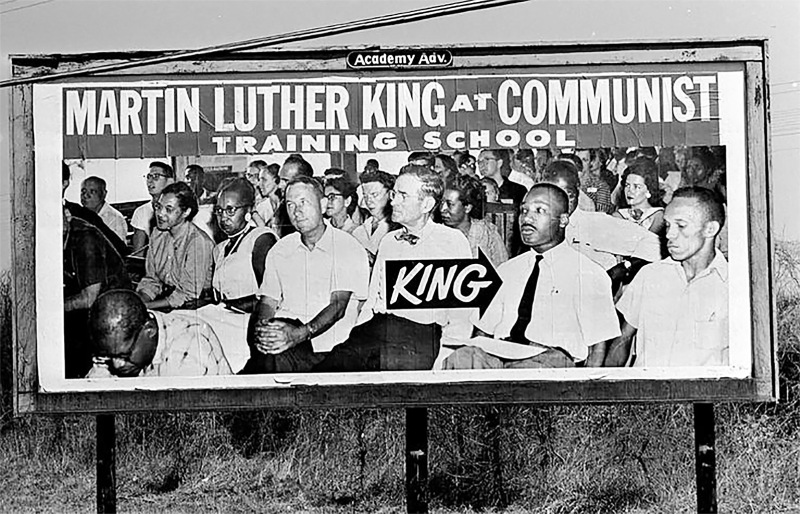 The "colleague" in question is John Lewis, a long-time, black U.S. Representative from Georgia's 5th District, and an essential member of the "Big Six" leaders of the civil rights movement of the 1960s. Trump previously had stated, on record, that Lewis was "all talk" and should pay more attention to his "crime-ridden Atlanta area district."

Shifting gears as smoothly as possible, would you believe me if I told you Martin Luther

When one hears mention of Grundy County, certain pictures immediately flash in the brain; a

burly, bearded fellow navigating his four-wheel-drive truck down a curvy, two-lane blacktop while listening to Lynyrd Skynyrd; folks standing in line inside a mom & pop-owned store waiting to pay for an extra-thick bologna sandwich and a Sun-drop; rugged mountains thick with timber and wildlife -- "borderline Appalachia," I've heard the area termed.

Myles Horton, a white man, was born in Savannah, Tennessee, in 1905. At an early age, he grasped the importance of working together as a collective unit in an attempt to solve everyday problems, problems that often resulted along ethnic/ economic/ social lines.

After studying at several universities, Horton made a journey to Denmark to personally observe the Danish Folk School movement, "a populist education experiment developed in opposition to the lifelessness of traditional schools....Danish Folk Schools encouraged students to broaden their experience by analyzing important questions and problems, and then actively participating in practical solutions."

In 1932, with help from others, Horton founded and opened the Highlander Folk School, located near Monteagle, Tennessee. (Note: The City of Monteagle is located in Grundy County.) Horton was quoted as saying Highlander was established "to provide an educational center in the

South for the training of rural and industrial leaders, and for the conservation and enrichment of

the indigenous cultural values of the mountains," a direct product of Horton's Denmark experience.

From the beginning, all races and all walks of life were welcome at Highlander; the only requirement was the desire to learn and better one's self. It wasn't long before it became popular with many civil rights activists. Contrarily, law enforcement and die-hard conservatives at all levels labeled Highlander as a breeding ground for "communism"!

During the mid-1950s, it was an "established rule" in the American South that blacks had to sit in the rear when riding public buses. Still, if all seats were filled and a white boarded the bus, a black was supposed to give up his/ her seat to the white.

In July 1955, Rosa Parks, a black seamstress from Montgomery, Alabama, had attended a workshop at Highlander Folk School. On December 1, 1955, while riding a public bus in Montgomery, Parks refused to give up her seat to a white man, and she was arrested. The incident quickly became national news as blacks -- and some whites -- sided with Parks and refused to ride public buses in Montgomery.

The spokesman for the "Montgomery Bus Boycott," as it was dubbed by the press, was an eloquent, black, Baptist minister named Martin Luther King Jr.

The boycott lasted for almost a year. In November 1956, the United States Supreme Court ruled it was illegal to enforce segregation on public buses in Alabama. The boycott was a success, thus a major milestone for the civil rights movement.

Relatively unknown prior to the Montgomery Bus Boycott, King went on to become the greatest voice ever in the civil rights movement, reaching a crowning peak with his "I Have a Dream" speech, given to some 250,000 listeners at the Lincoln Memorial on August 28, 1963. Tragically, however, that great voice was forever silenced by a single bullet in Memphis, Tennessee, April 4, 1968.

Regarding the brave and historic stand Parks took on that public bus on December 1, 1955, in

Montgomery, she would state she came about the necessary courage and moral fiber to do so by attending the workshop at the Highlander Folk School in July of the same year.

Reverend Martin Luther King Jr. might have been just another Baptist minister instead of the national holiday he is today.