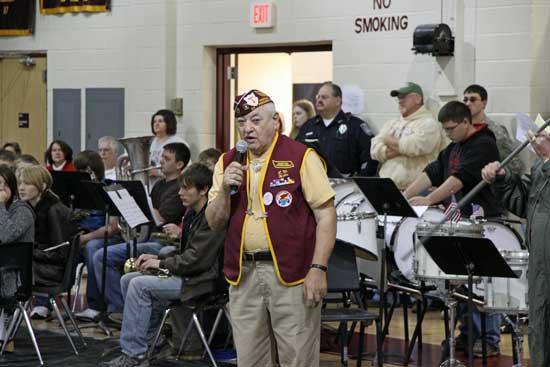 Korean War veteran Louie Hillis addresses the audience. (Photos by Sean Parker)
The crowd was full of enthusiasm and filled the auditorium. This is the only way to describe the ceremonies that took place Friday, November 13, 2009. Veterans Day, which is officially observed on November 11th (Armistice Day, originally) was celebrated in Cannon County on Friday to take advantage of the weekend to bring out as many people as possible.

The Cannon County Band, under the direction of Steven Porter along with the Chorale Leader Rob Guffey, played and sang the songs of the Branches of the Service along with the beautiful Star Spangled Banner.

The presenting of Colors (displaying of the U.S. Flag) was presented by the Riverdale High School Junior R.O.T.C.

Each branch of service was recognized by the band playing their service theme song. The U.S. Navy was the song that I was waiting to be played and when they began “Anchors Away” the veterans stood behind the Navy Banner (flag, guide). Next were the Air Force and then and Coast Guard, U. S. Marines and then the Army.

The band and choir had played Happy Birthday to the Marine Corps, which is our oldest branch of service. Originally organized as the Continental Marines on November 10, 1775 as naval infantry, the Marine Corps have evolved in its mission with the changing military doctrine and American Foreign Policy. The Marines have served in every American armed conflict since its formation.

Next all the men and women who had served came forward and told what branch of service they had belonged to, some gave their rank and told where they were stationed most all of them told the years. There were only five WWII veterans present and about eight Korean Veterans with a lot of Vietnam veterans as well as Desert Shield – Desert Storm and Iraqi Freedom veterans were well represented.

Nolan Northcutt was chosen as the Civilian Grand Marshal of the Veterans Day Parade that was held on Saturday in Woodbury. Brothers Ray and Gene LeFever, both WWII participants, were also honored as the Grand Marshals. They are the brother-in-laws of Nolan Northcutt. Joe Patterson represented the Marine Corps having served two tours in Iraq. Louie Hillis represented the Prisoners of War (POWs); he was captured in the first invasion of Korea after the Communists had invaded South Korea in 1950.

Vice Mayor Charlie Harrell represented the United States Air Force; Harrell was a winner of the Soldiers Medal for saving the life of an Air Force Pilot after he crashed his plane. The Soldiers Medal is the Highest Award given a military man in peace time. Long time County Trustee Joe Rogers was selected to represent the U.S. Navy. Dan Bowling owner of the First Stop Market represented the U.S. Army. Bowling served two tours in Vietnam.

State Representative Stratton Bone was present to address the student assembly. Bone, a retired Tennessee Air National Guard County, always gives a good speech to the assembly. Executive Mike Gannon addressed the student body on how proud he was of the youth in the county that took up the burden of looking to the needs of the future and how proud he was of the United States. Woodbury Vice Mayor Charlie Harrell addressed the student body and congratulated them on their interest and behavior when it came to the veterans of Cannon County.

Tennessee Department of Veterans Affairs Commissioner John A. Keys was also present as a guest. The veterans were really pleased to have him in the assembly.

Vice Principal Bonnie Patterson told those gathered about the “Wall of Honor” of all the military either in the service or those who have served that were from Canon County High School. Mrs. Patterson read all 75 names that were on the Wall of Honor. Mrs. Patterson recognized the family of 1st Lt. Frank B. Walkups’ family who were in the audience.

Lisa Choate also presented a program which was received very well. She presented a live conversation via video computer network with Jennifer Duggin who is and has been stationed in Iraq. He image was projected on the screen and her voice was clear as a bell. Her children and family were present at the gathering in the auditorium.

Next Representative Stratton presented a Congressional Resolution to High School teacher Carylee Caputo for her outstanding service concerning historical remembrances of Cannon County and the Veterans of this county, state and country. Caputo accepted the Resolution graciously. Later in the program she presented Andrew Walkup with the 9th edition of the “Oldun’s Stories told to Youngun’s” in honor of his brother 1st. Lieutenant Frank B. Walkup IV who was killed in Iraq on June 16th, 2007. Lt. Walkup IV will have the bridge on Auburntown Road named in his honor at a later date. Ms. Carylee Caputo told the crowd that all the proceeds to the book will go to the American Legion Post here in Cannon County

The Cub Scouts of Den # 376 presented a program showing the proper way of disposing of worn U.S. Flags. Outside displays were set up by the visiting military with a helicopter, which landed in the Fred Swartz football field. Shiloh Baptist Church had a display set up in the library of old military uniforms and artifacts.

A good meal was prepared for the veterans and visitors by the High School cafeteria staff. The VCCCCV pays for the food for the veterans’ thanks due to those sponsors who help monetarily during the Veterans Day activities. A traditional Thanksgiving Dinner was served and it was delicious. Our hats are tipped to the preparers of the food. A list of those sponsors are always printed on the backside of the programs.

Print
Members Opinions:
wbrysoldier
[Delete]
I just want to say thank you to Col. Stone, Lisa Choate, and all of Cannon County for letting me participate in the Veteran's Day activities, what an HONOR!!!The students at CCHS were wonderful and they did an awesome job! This is by far the best Veteran's Day program I have ever seen, just one more reason why Cannon County, TN is the best place on Earth! Thanks again for all your support, and remember next year, I will be there in person!