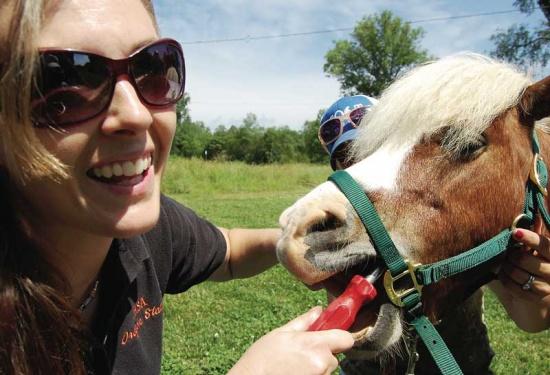 Down on one knee, she’s vigorously floating a horse’s teeth as she saws a small, metal file in and out of the mouth of Peanut, a mini-horse, taking the sharp edges off the creature’s molars.

“Sometimes I get the naughty ones that want to tap dance on your head,” said the equine ambulatory veterinarian, who works with no fear.

There are now more women veterinarians in the U.S. than their male counterparts (women outnumber men by more than three to one in veterinary schools, according to the American Veterinary Medical Association; the graduating class of veterinarians in 2007, a total of 2,489 students, was split 75.3 percent female and 24.7 percent male). But it is not a common sight in Middle Tennessee to see women vets manhandling the larger animals such as horses and cattle.

For this horse doctor, who lives in Eagleville, it was a case of love at first sight.

Born and raised in the small town of Willamina, Ore. (population 1,885), Mendenhall flipped for horses as a child of 5.

“I just love horses and animals and always wanted to be a vet. People tried to talk me out of it,” said the equestrian physician, who turns 30 years old June 16. “People are really hurting for rural vets. There is a big need for large animal vets. I do a lot of the smaller, one-two-three horse owners. I also take care of several larger boarding and training facilities.

“A larger number of those graduating from veterinary school are going to small animal practice, not just because of the pay and hours but for all sorts of reasons. Not many people want to do this — long hours. It’s a labor of love,” said Mendenhall, who works 10 to 12 hours a day

Earning her doctorate of veterinary medicine from Oregon State University in 2007, Mendenhall is no stranger to Middle Tennessee. During her teen years, she worked for a family in Oregon that trained horses for competition in the Tennessee Walking Horse National Celebration in Shelbyville.

“I showed Tennessee walking horses. We came south to Tennessee every year. I really liked the area. We came back every year for about six weeks at a time.”

After practicing a year in Monroe, Va., Mendenhall came here two years ago and then opened her own practice in 2009. She operates out of Anderson Veterinary Clinic in Christiana, a small animal care practice, owned by Al and Jana Anderson, also Oregon natives and who are like second parents to her. They think she is a pretty fair vet with a flair for horses.

“She is willing to go the whole nine yards for the horse,” said Dr. Jana Anderson. “Boy, she is tough as nails and very capable. With horses in general, it’s not always about using your brawn but about using your brains … and she has good horse sense.”

Today, Mendenhall wears sunglasses, a black Oregon State shirt, blue jeans and boots. She said, “There are a lot of large animal vets around here, all really good vets. It’s a competitive market that’s for sure, but a lot are in the Shelbyville area.

“I do a little bit of cattle work, but there are better cattle vets out there,” she said honestly. “Horses, I do everything with — dentistry, breeding, giving health care, preventative maintenance.”

Like the old-fashioned country doctors of the early 20th century, Mendenhall makes house calls (or are they barn calls?) as she drives to such communities as Lascassas, Readyville, Woodbury, Walter Hill and Bell Buckle, notching about 200 miles a day on her white Ford Explorer.

When her clients need convalescence, she “hospitalizes” them at Brookside Stables in Eagleville.

For relaxation, the vet rides and shows horses. She owns five of her own: two riding mares, a mare and foal and a half-linger pony. “My hobbies are my horses,” she said. And a couple of times a month, she heads for Nashville so she can get her fix of live country music.

While the job has its occupational hazards (“I’ve been kicked a lot and was kneed in the face once and broke a tooth”), Mendenhall plans to continue horsing around.

“I enjoy people that have the smaller places. I like making a difference with horses and educating and helping people learn how to care for their horses. That’s my favorite part,” said the happy veterinarian.

(Ken Beck can be contacted at kbtag2@gmail.com.)