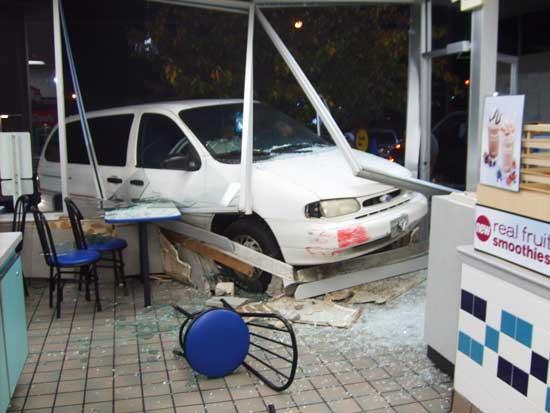 On Monday, October 11, 2010 Ms. Elaine Cathey was pulling into handicapped parking at the McDonald's restaurant in Woodbury, when according to her she missed the brake and hit the gas pedal.

As a result the 1996 Ford Windstar van went through the front plate glass window into the building.

McDonald's employee Kayla Tramel who was on break inside the store, injured herself when trying to move out of the way of the van. She was transported to Stones River Hospital in Woodbury with undetermined injuries.

Charges against the driver Elaine Cathey are pending at this time. The accident was investigated by Woodbury Police Dept. Sergeant Kevin Mooneyham.

Print
Members Opinions:
[Delete]
That's what happens when I order no pickles & you put them on there anyway!
[Delete]
charges pendin come on handicapped driver. give them a brake. we all mess up now and then.
[Delete]
Where am I gonna get my coffee when I visit the Wildbury now?
[Delete]
Heeeey VERN! Hold my beer and watch this.....
annonomoose
[Delete]
Unlike those who would make jokes about this,I hope the citizens involved are all o.k. Thank goodness no one was killed,or suffered major injuries.Certainly nothing for an HONORABLE person to joke about. I doubt the real(if he were still alive) Jim "hey vern" Varney would find it funny either.