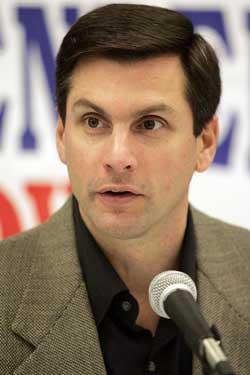 Dooley, 42, comes to the Vols after three seasons as head coach at Louisiana Tech, where he also served as athletics director since March 2008. Dooley compiled a 17-20 overall record in three seasons with the Bulldogs, including an 8-5 mark in 2008 that was highlighted by the school’s first bowl game and bowl victory in 30 years at the Independence Bowl. For his efforts, the Louisiana Sports Writers’ Association named him Coach of the Year.

He left LSU with Saban to serve as tight ends coach for the Miami Dolphins from 2005-06, before being named to his first head coaching position at Louisiana Tech on Dec. 17, 2006.

Dooley, son of former Georgia coaching legend Vince Dooley, was a walk-on wide receiver at Virginia before earning a scholarship after his second season and leading the Cavaliers to three bowl appearances and the 1989 ACC championship.

“We are excited to welcome Derek and Allison to the University of Tennessee family,” said UT Athletics Director Mike Hamilton. “Derek is one of the bright young coaches in America. He understands our league and the competitive environment in which we compete.

“He took a very difficult first head coaching job and has made significant strides there in a short period of time. He is incredibly bright, a tireless recruiter and excellent on-the-field coach.”

Dooley is married to Dr. Allison Jeffers Dooley, an OBGYN. They have two sons, John Taylor (11) and Peyton (8), and a daughter, Juliana (6). Dooley earned his bachelor’s degree in government and foreign affairs from the University of Virginia in 1990, and his law degree from the University of Georgia in 1994. Before embarking on his coaching career, Dooley practiced law at a private law firm in Atlanta for two years.

The press conference is closed to the public but will be streamed live on utsports.com.