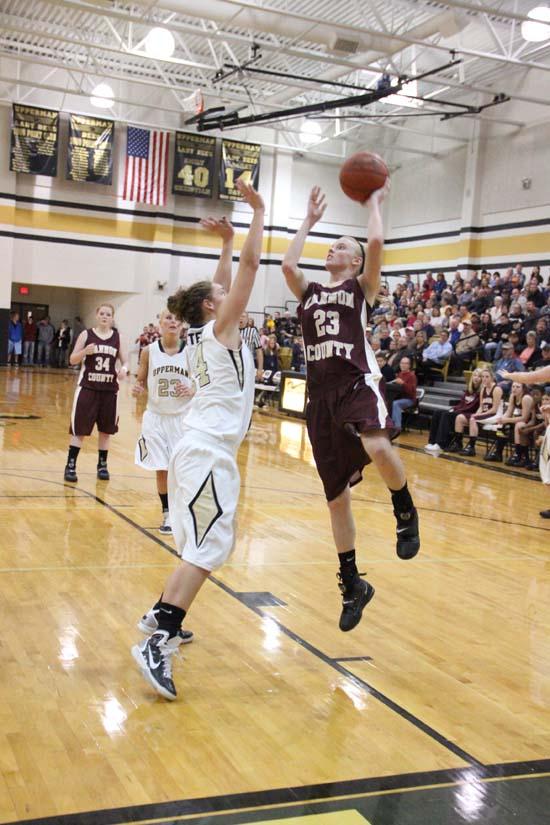 Cannon County senior Taylor King, 23, puts up a shot over the Upperman defense Friday. King returned from a two-game absence due to illness to lead the Lionettes with 16 points on 7-of-12 shooting.(CANDICE JONES photo).
BAXTER - Upperman is starting to become the kryptonite to Cannon County's girls basketball team.

Cannon County (18-4, 3-2) slipped to third in the 8-AA race and lost for the second time in three games during a five-day span with both setbacks coming to nemesis Upperman.

Before they can move forward, Cannon County has to fix problems that are suddenly hampering the team, such as an inability to convert shots, get stops and play the sound defense that had made the Lionettes one of the top Class AA teams in Tennessee.

They were rendered helpless against Upperman.

"It was the same as Monday night when they beat us (56-44)," Lionettes Head Coach Michael Dodgen said. "We didn't make shots. We didn't make free throws. We have to get better and we have to fix it because at some point this year if we want to accomplish our goals then we are going to have to beat (Upperman) at some point. We just have to buckle down and find ways to score and that's me as a head coach and my assistants finding a way to come together and do it."

They may have to do it without sophomore reserve Abby Jakes, who has been solid for the Lionettes all season. Jakes suffered an injury to her left knee during the third quarter and had to be helped off of the court. She did not return.

"It does not look good," Dodgen said. "We will get it looked at and go from there but Abby was hurting and losing her hurts because she means such a great deal to our team."

Senior Taylor King, who missed both earlier games during the week with the flu, returned Friday and led the Lionettes with 16 points on 7-of-12 shooting, along with three rebounds. King was the only Lionette with double figures. Chelsey Payne added eight points and six boards, while Lauren Ruehlen finished with five points and five caroms.

The Lionettes went with a new lineup in Friday's game against Upperman with freshman Abbey Sissom, who had started 21 consecutive games at point guard, coming off of the bench in favor of junior Lindsey Reed. The move paid little dividends as Reed scored two points and Abbey Sissom, the team's third-leading scorer and second-leading 3-point shooter, failed to register a point in her new role.

"We are starting to get players healthy and we were looking at some different things but this in no way suggests we are completely changing what we are doing," Dodgen said. "We just tried something different (Friday) that was based on match-ups."

In the first meeting between the teams Cannon County fell behind by double figures early and never could dig out of the hole it had created, but Friday was a different story. The game was highly-competitive throughout the first half with Upperman clinging to a 22-18 halftime lead, but the Bees stung the Lionettes 31-23 in the second half to pull away and claim the win.

An inability to make shots hampered the Lionettes, who connected on just 15 of 44 field goals for 34 percent. They were also a disappointing 10-of-20 at the free-throw line. Generally a strong outside shooting team, Cannon County managed just one 3-point field goal for the second time in as many games against the Bees.

Cannon County also has been unable to get its top scorer, Emily Sissom, quality looks or shots against the Bees. Sissom got off just 10 shots Friday after managing just 12 against them Monday.

Cannon County will look to end its two-game league slide when it travels to No. 6 Livingston Academy Monday.

Print
Members Opinions:
ssconnection
[Delete]
Stick with what gotcha here!!! Press and man to man and fast break. Dont change your game plan to fall right into Upperman's web. Thank you very much.