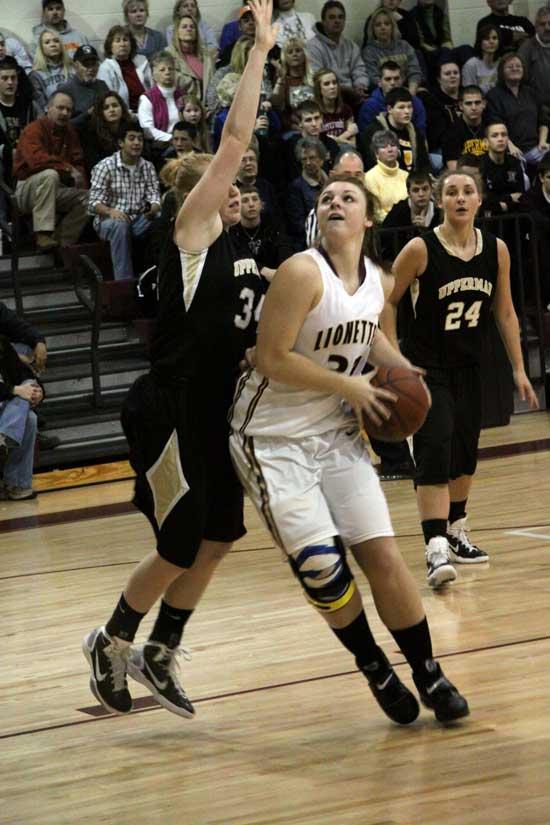 Senior post Lauren Ruehlen, 32, works to drive around the defense of Upperman’s Rachel Conradi during Monday’s District 8-AA showdown at Cannon County.
Only one team showed up for the showdown.

When No. 3 Cannon County and No. 9 Upperman collided in a battle of Top 10 foes for a key early-season District 8-AA showdown, it figured to be an early-season classic.

The showdown turned into a letdown for Lionettes' faithful, who watched their team suffer a stunning 56-44 setback. The loss ended Cannon County's 11-game win streak and also was its first loss at Robert A. Harris Gymnasium.

"There is nothing you can do about that and there will be no excuses," Cannon County Head Coach Michael Dodgen said. "You can't dwell on a loss like this. You just have to be more prepared the next time you play them and work to get better. If I know this team the way I believe I do then they will battle back and do what we need to do."

Cannon County's offense was anemic throughout as the Lionettes managed just nine field goals, including one 3-pointer. They had just three in the first 16 minutes as Upperman took early control.

"It is the first time we have faced a situation where we didn't score," Dodgen said. "When we didn't score early we kind of panicked a little bit. We were not making shots. When we have been at our best offensively we have created a lot of offense off of our defense and that was not the case."

Sharing the ball and running the offense generally has created open scoring opportunities for the Lionettes but they had just one assist in Monday's game. Some of that can be attributed to the 9-of-34 performance from the field as well as 11 turnovers that took away scoring opportunities.

Cannon County's offensive woes were coupled by defensive breakdowns that created numerous easy scoring chances. The Bees stung the Lionettes for a 50 percent (20-of-40) shooting clip. Upperman stormed out to a 14-5 lead and took the crowd out of the game early. The Bees led 20-5 at one point in the first half before the Lionettes closed to within 23-16 at the half.

The Lionettes showed some grit and closed to within three twice late in the third quarter and trailed 34-30 going into the fourth, but Upperman scored the first five points of the fourth quarter to turn back the Cannon County comeback bid.

Cannon County will face Bledsoe County in non-district action at Robert A. Harris Gymnasium tonight at 6, before getting another chance at Upperman Friday.