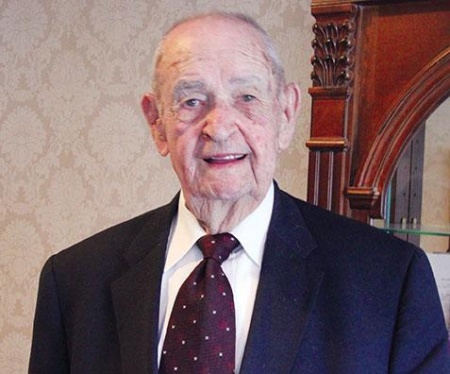 Bill Smith is like the Energizer bunny except he keeps giving, and giving and giving.

Smith, who graduated from Woodbury in 1937, spent the majority of his career at Commerce Bank where he made a habit of supporting local schools' sports teams and programs while also promoting students.

Smith is one of six individuals who will be inducted into the Cannon Courier Sports Hall of Fame during an induction ceremony at The Arts Center of Cannon County, May 15 at 6:30 p.m. Doors open at 6 p.m.

Smith worked at Commerce Bank for 55 years and served as its president for 38. He never missed a day and was never late.

"It was important to me just to have a good record and to be dedicated to what I was trying to do," Smith said. "I owe so much of what I've done in life to the people of Cannon County, my fellow workers and people I went to school with, my teachers, my family. I owe so much to everyone."

If Smith, 94, felt a debt he certainly has more than repaid it through decades of giving and working to help make things a little better for mankind.

It only makes sense he is entering the Hall of Fame as a contributor.

"From a personal perspective, I was fortunate to have Mr. Smith's extraordinary support for many years, both as a person and an athlete," said former Cannon County standout Julie Powell, who is also a member of the Cannon Courier Sports Hall of Fame. "From early in my career, Mr. Smith would mail me newspaper clippings of the accomplishments of my basketball teams. Bill Smith was also an enthusiastic and generous supporter of my AAU basketball teams for many years.

"I can vividly recall one of my visits to Mr. Smith at the bank to raise money for my AAU team one year. After we had adequately discussed sports and farming, he looked me in the eye and asked, 'How much do you need?' I know he was extremely proud of the people and sports programs of Cannon County, and he took the time throughout the years to send me handwritten notes expressing his support and encouragement."

Smith said he saw 90 percent of Powell's high school games and 90 percent of her college games at Vanderbilt. Cannon County's all-time leading scorer is just one example of the many young people who benefited from Smith's generosity.

He says giving was a means of helping others achieve goals and understand dedication at an early age.

"I thought it was so important to impress kids to be dedicated to what they were going to do in life, and I thought it was important to have a bank that would share the expense with them," Smith said. "It makes you feel a sense of accomplishment, a sense of satisfaction that you have maybe helped someone else be a little better in life."

Smith's kindheartedness wasn't just for individuals or programs. He provided careers for young people, hiring more than 150 students throughout his service at the Bank of Commerce.

"No other person in Cannon County supported and encouraged students (outside of the school system) more than Bill did," said Shirley Young, Smith's secretary for 20 years and his presenter for the Hall of Fame induction. "He hired more students as part-time or temporary employees than any other business in Cannon County, always encouraging students to continue their education. Whenever we were compiling a list of all employees of the bank for a reunion last year, we came up with more than 150 names of part-time student employees."

Young said Smith encouraged bank employees to support fund-raising activities and attend sporting events. She said Smith would tell employees to buy whatever students were selling and he would pay them for back for whatever they purchased.

"I saw an up-close view of his passion and enthusiasm in supporting and promoting supports activities and programs of the schools," Young said. "Bill truly promoted and supported Cannon County."

Powell pointed out one long-running example of his support was the "Lions Tale" page. Started in 1980 under Smith's direction, Bank of Commerce sponsored the "Lions Tale" page in the Cannon Courier each week for more than 20 years. Information for this full-page ad was provided by Cannon County High School in order to allow recognition of all sports teams, coaches and participating individuals.

Smith said he's only ever expected one thing in return for helping someone.

"The reward will be for them to do for someone else," Smith said. "You do it to help people. It does me a lot of good to know I have helped someone. I just want to do something to serve Cannon County and make it a better place."

Smith donated the land where this year's Hall of Fame induction is being held - The Arts Center of Cannon County. It was his generosity that allowed a major part of Cannon County's community to find a home here through the land donation.

He also provided benches for baseball and softball fields, and hosted a pizza party in the Community Room for the grammar school tournament champions each year. The Bank of Commerce also sponsored miniature basketballs and footballs thrown by cheerleaders to the crowds during sporting events.

Smith was inducted into the Tennessee Bankers Hall of Fame in 2011. He also was chosen to carry the Olympic Torch during the route when the Olympics were held in Atlanta.

The list of contributions from Smith are countless and far reaching, covering decades.

Smith doesn't do what he does for conversation. He gives because he genuinely cares about the betterment of others.