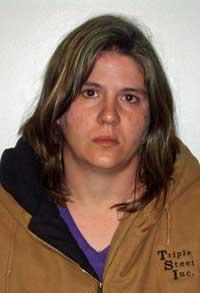 GREER
The Woodbury Police Department has arrested two individuals from College Grove, Tennessee for delivering drugs to the Town of Woodbury.

Robert T. Lee, age 25, and Tonya Greer, age 28, were indicted by the Cannon County Grand Jury in January for Sale of a Controlled Substance and Maintaining a Dwelling or Vehicle to keep use or sell drugs.

These arrests are a result of an investigation that started in September 2010 after information was received about individuals who may be delivering drugs to the Town of Woodbury.

"Almost all of the officers of this department were involved in this investigation at some point," Woodbury Police Chief Tony Burnett said. "I would also like to thank the Rutherford County Sheriff’s Department for their assistance in the location and apprehension of Lee and Greer."

Both of these individuals were placed on $15,000.00 bond to appear in Circuit Court here in Cannon County.

Print
Members Opinions:
cherleader
[Delete]
I am sure who ever "Triple Steele Inc" is appreciated the advertisement in the mug shot!!
bh123424
[Delete]
Good work by the local law enforcement. Hope the judges will follow suite
Redeemed
[Delete]
Too bad people don't serve "hard time" anymore or this might be their last offense.
Victosdomino
[Delete]
bh123424 I agree it is often the judges that let them slip.