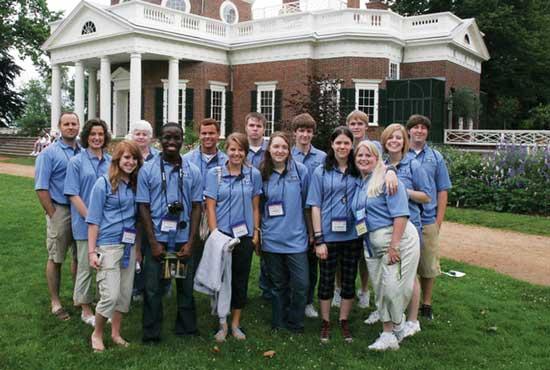 More than 130 students from electric cooperatives across Tennessee recently added their names to the growing list of young leaders who have experienced the vibrant activities of our nation’s capital as part of the 2009 Washington Youth Tour.

An annual tradition for more than four decades, the Youth Tour is a weeklong event packed with opportunities to learn what it is like to be involved in politics and community service.

Tennessee’s Youth Tour participants won spots on the expense-paid trip for writing the best short stories in their respective electric cooperative service areas. Titled “Electric Cooperatives: Energizing Our Communities,” the short stories were a way for the high schoolers to learn how their locally owned, member-controlled electric cooperative provides valuable community-building support as well as reliable and affordable electric service.

This year’s trip ran June 12-18 and included meetings with elected officials, visits to Washington’s popular tourist stops and time to meet winners representing other co-ops across the state.

While in Washington, Tennessee’s group saw the White House and memorials to past presidents Thomas Jefferson, Abraham Lincoln and Franklin Delano Roosevelt as well as monuments honoring the sacrifices of veterans of World War II and the Vietnam and Korean conflicts. Strolls through the varied museums of the Smithsonian Institution afforded the students opportunities to learn more about science, history and art. Other stops included homes of former presidents — George Washington’s Mount Vernon and Jefferson’s Monticello — Madame Tussauds Wax Museum, a performance of “Shear Madness” at the Kennedy Center for the Performing Arts and an evening cruise down the Potomac River. The Youth Tour also included visits to Arlington National Cemetery, the Holocaust Memorial and the newly opened Pentagon Memorial, which honors those who lost their lives in the terrorist attacks of Sept. 11, 2001.

Later in the tour, the group was treated to a special after-hours, VIP guided tour of the historic U.S. Capitol by Rep. Lincoln Davis of Pall Mall and Rep. Zach Wamp of Chattanooga and a meeting on the Capitol steps with Tennessee’s senators, Lamar Alexander and Bob Corker.