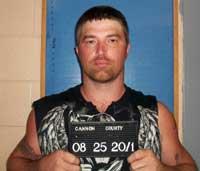 Investigator Young said he initially received information there was a stolen vehicle at 1205 Center Hill Road. However, upon investigation, the Toyota truck was found at an address on McMinnville Hwy.

Additional information received in the case led to McPeak being developed as the alleged their.

The arrest in the other case also took placed on Aug. 25. According to Investigator Young, Lucas  Dobson, 1724 Pleasant Ridge Rd., Woodbury, was charged with theft over $10,000 following an investigation.

The purported victim, Grady Parker, reported the thefts on Aug. 22. Parker was able to locate and recover some of the items himself, including at an abandoned house on Jones Hollow Road.

Interviews of Parker and other parties led to Dobson being identified as a person of interest and he was subsequently charged.

In other recent incidents:

• Julie Chambless, 90 Hollow Springs Rd., Woodbury was charged with two counts of aggravated domestic assault on Aug. 29 by Cannon County Sheriff’s Deputy Eric Moss. Chambless allegedly went to the residence of Kenny Gooch armed with a knife. Gooch told Chamless to leave, but she entered the residence and began fighting with him. Gooch received several cuts to his body during the altercation. Bond for Chambless was set at $10,000. Initial court date is Nov. 1.

• Michael Shane Greer, 1063 Red Hill Rd., Woodbury, was arrested on a warrant for domestic assault on Aug. 24. The purported victim alleges that Greer grabbed her hair and arm during the incident. Initial court date was set for Sept. 27.

• Kayla Bree Hickey, 372 Circle Hill Dr., McMinnville, was charged with possession of drug paraphernalia on Aug. 25 by Cannon County Sheriff’s Deputy Brandon Gullett. Hickey allegedly had in her possession a cigarette pack which contained several small, clear plastic baggies along with two straws which were found in another bag. The incident occurred after finding Hickey at a residence (1205 Center Hill Rd.) at which stolen property was located or supposed to be located. Bond was set at $5,000. A release citation was issued. Initial court date is Sept. 6.

• Mickey E. Russell, 1704 Charlotte Pike Ste#200, Nashville, was charged with reckless driving, felony evading arrest and driving on a suspended license by Woodbury Police Sgt. John House on May 13. Following his arrest here, Russell was transported to Warren County, where he was facing unrelated charges. He was transported to the Cannon County Jail following his release and the warrants were served on Aug. 29. Russell allegedly tried to elude Sgt. House after he received a signal to bring his vehicle to a stop on McMinnville Highway. Total bond was set at $7,500. Russell was appointed an attorney in Cannon County General Sessions Court on Aug. 30. His next court appearance is set for Sept. 27. Russell also faces charges in Rutherford County.