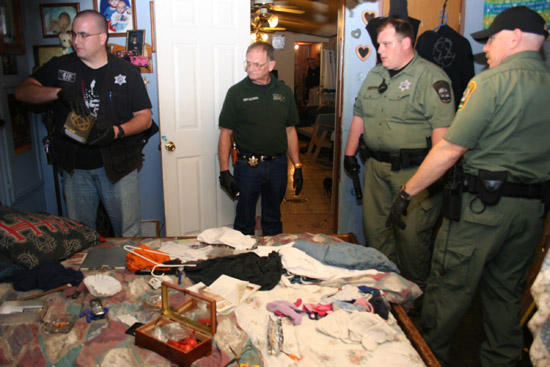 Investigator Vance Walker, Sheriff Billy Nichols, Deputy Reed Bryson and Deputy Pat Fann examine some of the items found during the search of the meth lab on Iconium Road.
Cannon County Sheriff’s deputies found their second meth lab in a week Thursday afternoon April 1 while attempting to serve a warrant in the East Side community.

“We had information that William Gary Jaco was living at 2691 Iconium Road,” said Sheriff’s Investigator Charlie Wilder. “Mr. Jaco was released from custody in November 2009. He had 10 days to register as a sex offender but he had not complied with state law, therefore a warrant had been issued for his arrest for Failure to Register as a Sex Offender. He also had warrants outstanding for Aggravated Burglary, Domestic Assault and Violation of Probation.”

“When we stepped on the front porch you could smell the chemical odor and we knew what was inside,” said Deputy Moss. “We called Investigator Wilder and told him what we thought was inside the home.

Investigator Wilder went to the Jail and prepared a search warrant which was signed by Judge Susan Melton and proceeded to the Iconium Road location.

A thorough search of the residence was conducted and the entire crime scene was photographed for later prosecution.  Officers found a quantity of meth bagged for resale, a two-liter bottle containing meth in the ‘cooking’ process, Coleman fuel, Muriatic acid, lithium batteries, other items necessary in the manufacture of methamphetamine and other drug paraphernalia.

Arrested at the residence were: William Gary Jaco, 40, and Amanda Charlene Barrett, 41, both of 2691 Iconium Road, Woodbury.

The Department of Children Services was called to the scene by officers when they found a juvenile was present in the home while the meth was being manufactured.   They conducted an investigation and no charges were filed at this time but they may choose to indict later.

Emergency Management Director Faye Morse was called to the scene to decontaminate Ms. Barrett and the juvenile. Mr. Jaco was decontaminated at the Cannon County Jail before being booked.

“This was a good bust and my officers did a great job conducting the investigation,” said Sheriff Billy Nichols. “The  arrest kept meth from getting on the streets. By finding two meth labs in a week is an indication that the manufacture of meth is becoming popular again. This was a good size operation from the amount of chemicals and trash that was found. Investigator Wilder contacted Assistant District Attorney David Puckett and informed him of the search warrant and the status of the case. We appreciate the help and support General Puckett gives our department in all our criminal cases.”

Buddy Chaffin from the Tennessee Methamphetamine Task Force arrived at the scene to assist in the investigation. A Haz-Mat cleanup crew also responded to the location from Nashville and removed all the toxic items and chemicals that had been found during the search. They will be taken to a certified disposal site and destroyed.

Cannon County has had over 100 people arrested involving methamphetamine labs since 2002. This total increased by six with the arrests and seizure of two meth labs last week by the Sheriff’s Department.  At one time the Grand Jury of Cannon County was seeing 54% of the felony cases to be meth related.