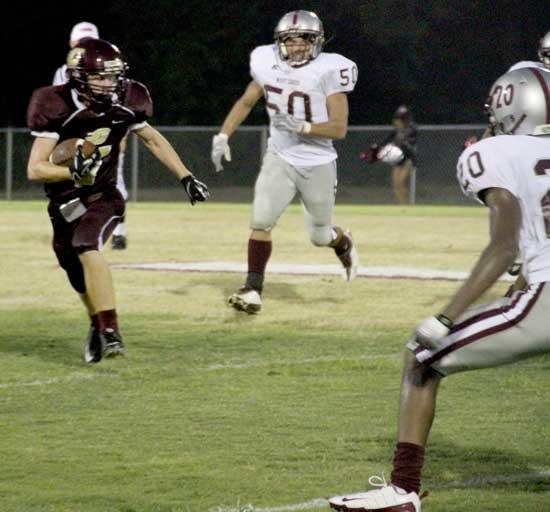 Colin Jones tries to elude West Creek defenders Friday night. (CANDACE JONES photo)
Cannon County lost its home opener to West Creek but the Lions may have found part of their identity in a 48-6 setback in front of a partisan crowd at Schwartz Field Friday.

Sophomore receiver Justin Tobin accounted for Cannon County’s lone score on a 17-yard touchdown reception from quarterback Heath Simons in the third quarter. Tobin’s touchdown grab was his first as a Lion and capped an impressive 73-yard, 13-play drive that took 9:30 off the clock to the start the second half.

Simons completed 3-of-5 passes for 35 yards on the drive but it was the bruising downhill running of senior Gabe Walkup and junior back Damon Collette that keyed the drive. Walkup finished the night with 107 yards on 22 carries, while Collette tacked on 36. Walkup is averaging 90.5 yards per game to lead the Lions’ offense.

“We are going to be a good running football team,” Cannon County Head Football Coach Joel Schrenk said. “Our identity on offense is going to be our running and we have a chance to be good there. We did some good things in the game, just not enough of them.”

Cannon County almost doubled its offensive output from the opener with a balanced offensive attack that accounted for 235 yards. Behind the gutsy and determined running of Walkup and an offensive line that would not wilt, Cannon County piled up 121 yards on the ground against West Creek – exactly double its rushing output of 62 yards against Spring Hill. Simons completed 11-of-21 passes for 114 yards – 32 yards more than he threw for in the opener.

Simons also was able to involve more players in the passing game with six different Lions hauling in passes, led by Tobin and Collette with three each. Collette had three catches for 39 yards and Tobin finished with three for 37 yards and the touchdown. Colin Jones had two catches, and Jordan Linder, Justin Weaver and Walkup had one each.

“We showed some signs of improvement on offense this week and we did some good things,” Collette said. “We just have to protect the ball and keep drives going. We have a chance to have a good season and we have a big (district) game coming up against DeKalb County. There is no quit in this team, and I think that showed tonight.”

The Lions were guilty of a fumble that killed one drive near midfield near the end of the first quarter and an interception inside the Coyote 25 stopped another midway through the first half. West Creek turned each turnover into points.

“It never fails that good teams will make you pay for mistakes and that was true tonight,” Schrenk said. “We put ourselves in some tough situations.”

The Lions were in a great deficit from the outset for the second week and, once again, big plays were the undoing. Three of West Creek’s first five touchdowns went for 39 yards or more, including an 80-yard run and an 80-yard interception return. The score was 28-0 after the first quarter and 41-0 at the break. Once again, missed tackles proved to be a trouble spot for the Lions defense, which was led by Tobin and Simons with nine tackles each.

“We have faced two really good, athletic teams to start the season,” Schrenk said. “West Creek is much improved from last year and their depth was evident. I wouldn’t trade my kids for any that we have played this season but sometimes you just have to be realistic and realize that sometimes you just played a team that was better than you on that given night and this was the case here. We have good things ahead of us. We step into district play against our biggest rival (DeKalb County) Friday so we have to bounce back and put this behind us. I know we will do that because I know the character of these players.”