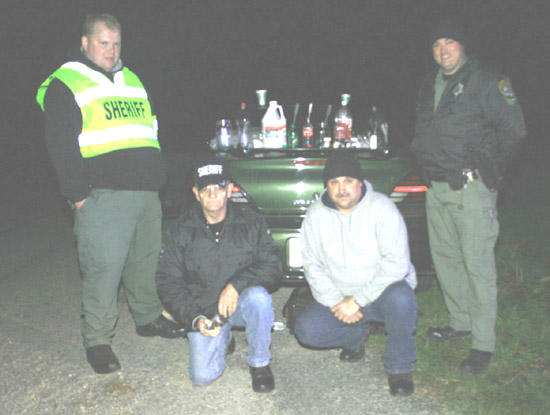 Left to right: kneeling, Sheriff Billy Nichols and Investigator Charlie Wilder. Standing, Lt. Brad Hall and Deputy Brandon Mims.
On Wednesday, March 31 at 12:58 a.m. while on routine patrol on Simpson Road Sheriff’s Deputies Brandon Gullett and Matt Parsley noticed a vehicle in the roadway with no lights. After following the vehicle a short distance the deputies initiated a traffic stop at the intersection of Parker Road and Hollow Springs Road in the Woodland community.

“When Matt and I walked up to the car we smelled the toxic fumes that is associated with the meth process and spotted what appeared to be items commonly used to manufacture methamphetamine in the vehicle,” said Deputy Gullett. “We then called for Sheriff’s Investigator Charlie Wilder to assist us at the scene.

“We have heard about the ‘shake and bake’ method of manufacturing methamphetamine but this was the largest mobile lab that we have found in this county,” said Wilder. “During our search of the vehicle we found some finished product, assorted drug paraphernalia, digital scales and all the items necessary to make meth including Coleman fuel and Muriatic acid. The chemical process was definitely underway to manufacture meth.”

A Judicial Commissioner set bonds at $100,000 for Brinkley, Davis and Scott. Jeremy D. Thomas’ bond was set at $105,000 with an additional charge of Tampering with Evidence. The four men will appear before General Sessions Judge Susan Melton on Tuesday, April 6, 2010.

“This is a common procedure in meth cases. The four men were all riding in the car with hazardous chemicals which contaminates their clothes and the car’s interior,” said Wilder. “We can’t put them in with other inmates until we know they have been decontaminated. It could cause serious health problems to other inmates and our Correction Officers if we did not take this precaution.”

The ‘shake and bake’ method is a relatively new formula for making one of the world's most addictive drugs: a two-liter soda bottle, a few handfuls of cold pills and some noxious chemicals. Shake the bottle and the volatile reaction produces meth.

This procedure is quickly gaining in popularity among meth users. Originally it could take up to six hours to ‘cook’ the ingredients necessary to produce meth. Now this new procedure is commonly done in vehicles going down the road and takes less than an hour to produce if the cooks know what they are doing.

Then the ‘cooks’ simply thrown the used container filled with toxic chemical residue out of the window. Aside from the environmental impact this has, it also poses a hazard to children that naturally want to explore and pick up things they find.

Only a few years ago, making meth required an elaborate lab - with filthy containers simmering over open flames, cans of flammable liquids and hundreds of pills. The process gave off foul odors, sometimes sparked explosions and was so hard to conceal that dealers often "cooked" their drugs in rural areas.

But now drug users make their own meth in small batches using a faster, cheaper and much simpler method with ingredients that can be carried in a knapsack and mixed on the run.

The "shake-and-bake" approach has become popular because it requires a relatively small number of pills of the decongestant pseudoephedrine - an amount easily obtained under even the toughest anti-meth laws that have been adopted across the nation to restrict large purchases of some cold medication. As a general rule meth is commonly sold by the gram, for example the approximate weight of 4 paper clips equals 1 gram and 28 grams equals 1 ounce.

"We've been dealing with it about two years now," said Sheriff Nichols. "They're making it in two-liter bottles, they don't have to cook it and they don't have to have anhydrous ammonia. You can do it going down the road as Deputies Gullett and Parsley discovered Wednesday morning. Their alertness proved to be essential in making this traffic stop and the arrest of the four men. This ‘cooking’ method generally produces meth in smaller quantity, but doesn’t make it any less dangerous.”

During the investigation officers took samples of the chemicals and inventoried the 2000 Pontiac Grand AM that was registered to Jeremy Thomas, a Haz-Mat disposal crew from Nashville arrived on the scene to remove the toxic items.

If you suspect someone of making meth using this method please contact the Sheriff’s Department as soon as possible. This type of meth lab is really a mobile ticking time bomb. Two instances involving ‘shake and bake’ occurred in Murfreesboro recently. Last month a rolling meth lab blew up in the parking lot of a convenience store and last week a ‘shake and bake’ lab destroyed a hotel room on South Church Street.

Luckily no one was injured in the explosion at the convenience store but the potential was great with the presence of gasoline tanks on the property. If you come across a discarded container used in one-pot (shake and bake) meth making do not touch it – contact the police to discard it, as they will likely need to have a haz-mat team clean up the mess left behind.

Print
Members Opinions:
[Delete]
GREAT JOB! I HOPE YOU GET THEM ALL OFF THE STREETS. But they will right back out and doing it again!