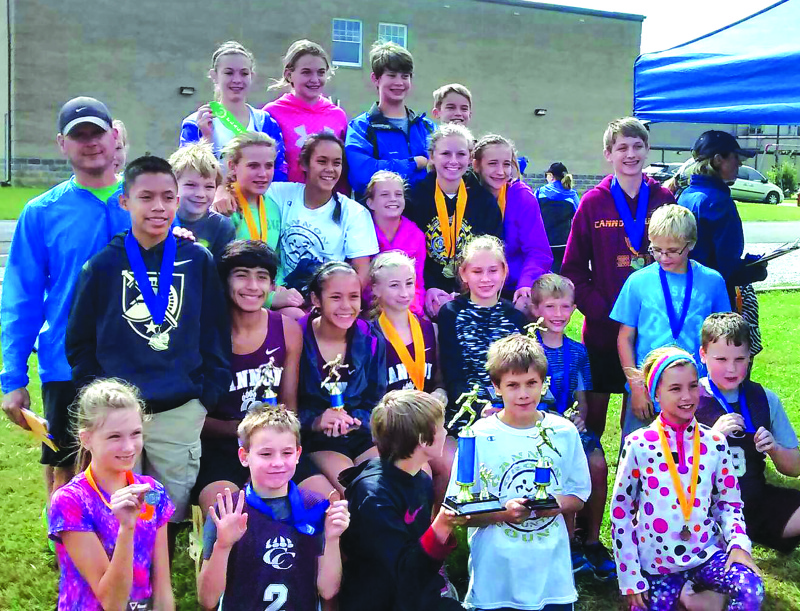 Both Cannon County cross county teams will run in the toughest and most important meets of the season this week. The Junior Lions and Lionette middle and elementary school squad was hoping to bring a state title back here on Oct. 24 with the Tennessee State Middle School state meet in Knoxville. While, the high school squad will compete at the Regional meet on Oct. 26 in Chattanooga.

In the three year history of the CCJL program, all three seasons have ended with a trip to the state meet, including this year. The Lionettes qualified for another state meet with a signature overall win in the Regional event at Macon County, while the Lions finished fourth at the same meet to also advance to state.

"They work so hard," CCJL head coach Brian Elrod said before practice last week. "I run them hard, and to have that success in three years the word is out on the program."

Also, for the first time ever, the new elementary school program also had six males and two females transfer to the state meet, which will be held on the same course in Knoxville. However, the race will be a shorter distance than their middle school counterparts.

The six Junior Lionettes who competed at state, included Zettie Elrod, Amanda Blanco, Hannah Higgins, Madison Gaither, Lexie Deese and Lauren Knox, while the Junior Lions were represented by Duncan Cook, Tyler Southworth, Collin Reed, Matthew Elmy, Tristan Davis and Ian Dearmond.
"This is the toughest course in the state, but we have been there the last couple of seasons," Elrod said. "It is rutted up, rough course."

"Let's go up there and take a team and see what we can do," Elrod said of the elementary team success. "They just did not go up there and do it. They took the team win, and all eight of them qualified for the state. It is crazy training for them, because they are going to come up to the middle school level next year. All it does is fattens up the high school squad."

Speaking of the high school cross country teams, while most teams except football are done with the season, and enjoyed fall break last week; the Lions and Lionettes have been hard at work preparing for the Regional meet at Camp Jordan in Chattanooga on Oct. 27.

It will be the second consecutive tough meet as they try to qualify for state, which will be held Nov. 7 at the Steeplechase course in Nashville. On Oct. 17, CCHS placed well at the Mid-State Championships in Smyrna on the Sharp Springs course.

The meet was divided into two divisions, Gold and Silver, which CCHS competed in the Silver race. The Lionettes were led by Hannah Whited, who finished third in a time of 19:58.23. Isabella Russo (11th) and Elva Magana (19th) also finished in the Top 20 in a race which featured 184 racers just in the Silver division.

Now the attention focuses to the Regional meet on Oct. 27 at Camp Jordan in Chattanooga. While most students were on fall break last week, these cross country racers were hard at work preparing for the most important meet of the season.

"We have had three great practices," CCHS head coach Marc Larson said. "A long run on Monday, hills Wednesday, and Friday we did speed work on the football field. The closer we get to the meet speed work becomes more important."

Larson also added in an email interview on Oct. 22, he feels his team is ready to go trying to chase a state berth, in which they will face another flat and fast course for the two mile race.

"From a coaches standpoint you just want to put them in a position where they feel they have done everything they could have to be ready," Larson said. "I am confident they have done that and that should allow them to PR. That's all we can ask."
Stay tuned to the Nov. 2 issue of the Cannon Courier for a detailed recap of both important meets.