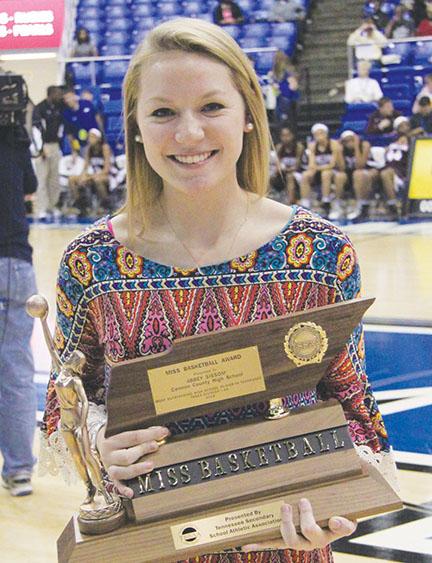 The MTSU signee was honored recently by USA Today when she was named to the newspaper's Tennessee All-State team. Sissom, the 2014 Class AA Miss Basketball in Tennessee, also is considered a lock to earn her third straight Tennessee Sports Writers All-State honor later this month.

Sissom, the daughter of Gaylon and Suzette, averaged 24.4 points per game in helping lead Cannon County to a school-record 33 wins and a berth in the TSSAA Class AA Girls State Tournament as a senior in 2013-14.
The Lionettes played in three state tournaments during Sissom's four-year career, including back-to-back appearances in 2013 and 2014. Her 2,606 career points are second all-time in Cannon County history.
Sissom averaged 24.4 points, 4.4 rebounds, 4.5 assists and 2.7 steals as a senior, while also shooting 40 percent from 3-point range and 89 percent from the free-throw line.

She is a three-time Miss Basketball Finalist and the 2014 winner, joining former standout Julie Powell as the only winners of the award in Cannon County history.

"Abbey had a great year and a tremendous career," Lionettes Head Coach Michael Dodgen said. "This honor is based on her senior season and it is one of the top individual seasons any player has had. She was one of the top scorers in the state and she helped lead her team to a great year. That's the most important thing to Abbey. She appreciates the recognition but it is not what she plays for. Abbey plays for her team and her teammates. When you are that type of person and the caliber of player she is, it is always good to be recognized for your hard work."

Sissom was a four-year starter for the Lionettes and gained the attention of college coaches with her breakout performance as a freshman in the state tournament.

Sissom signed with MTSU during the NCAA Early Signing Period in November.