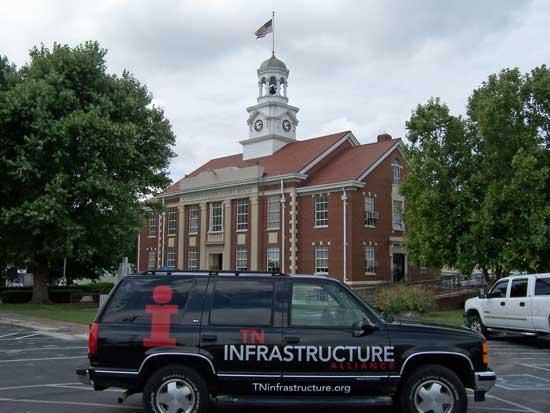 “Infrastructure is the very foundation of society, and its development and maintenance is one of the primary responsibilities of government,” said Pete DeLay, TIA Chairman. “Without basic infrastructure services – drinking water, sewer systems, flood control, a transportation network – the delivery of other services, such as education and health care, fire and police protection, are impossible.”

In Cannon County, 40 projects were reported that still require funding. Those projects come at an estimated total investment of $114,667,000. Projects can include infrastructure needs such as transportation networks, stormwater control, public school buildings, drinking water and sewer systems.

The TACIR report, “Building Tennessee’s Tomorrow: Anticipating the State’s Infrastructure Needs,” is the seventh in a series on infrastructure that began in the late 1990s. Released in September, the report highlights statewide infrastructure needs from July 2007 through June 2012, and puts a price tag for addressing those needs at a total of $34.2 billion. This represents an increase of $5.9 billion, or 21%, since the previous inventory— this figure includes the cost of upgrading existing public schools to good condition.

In the wake of the bridge collapse in Minneapolis in 2007, TACIR took a closer look at the information maintained by Tennessee’s Department of Transportation about bridge needs in the state and discovered that we had not been gathering all of it into the public infrastructure needs inventory. Consequently, this latest inventory includes nearly $660 million of bridge improvements that were not captured in earlier inventories.

“Adequate infrastructure means jobs for Tennessee’s communities,” said DeLay. “It is the key to economic growth & development. Without available infrastructure, public health and safety and our quality of life are jeopardized. We cannot ignore this growing problem.”

Other major findings in the report include:

• Three other categories increased since the last report: Education (20.0%), Health, Safety and Welfare (29.9%), and General Government (32.2%). The increase in the Education category is the result of increased needs reported by the state’s higher education institutions. Growing law enforcement and water and wastewater needs are the main reason for the increase in the Health, Safety and Welfare category. Most of the increase in General Government needs is for new or improved public buildings.

The Tennessee Infrastructure Alliance (TIA) is Tennessee's advocate for adequate infrastructure. By educating policy makers on the needs of the future, TIA helps Tennessee's communities plan to accommodate growth and promote commerce and safety.

Print
Members Opinions:
[Delete]
Beautiful Picture of the courthouse. I would have wanted to save that to my photo library if the truck had not have been in it. Nice shot.