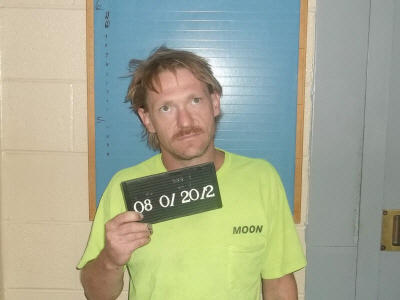 A man who has had a number of encounters with local law enforcement officers during the past few years found himself back behind bars recently.

After arriving, Sheriff Young advised Deputy McMillen that he observed movement inside the resident.

After knocking for about three or four minutes, Rhonda Merced come to the back door. Sheriff Young asked Mercedseveral times if her brother (Aaron Moon) was at the residence. She said he wasn’t and that she had just gotten home.

Sheriff Young asked Merced for permission to search the home, to which she consented. Before deputies entered the residence, Sheriff Young advised Merced that if Moon was found inside, she would be charged with filing a false report.

Upon searching, Moon was found hiding in a bed, wrapped up in a blanket. Moon was taken into custody, as was Merced.

Warrants obtained against Moon charge him with:

False Report: Filed on July 31 by Cannon County Sheriff’s Deputy Eric Moss. It is alleged that on July 6, 2012, Moon stated that Mandi Matthews was driving the vehicle that he (Moon) was in that was involved in a crash, while being aware that Benjamin Roberts was the driver. Bond was set at $12,000. Initial court date is Sept. 11.

Driving While License Revoked: Filed on Aug. 1 by Deputy Moss. Moon was allegedly driving a 1990 Dodge Dakota while his license was revoked for DUI.

Evading Arrest: Filed on Aug. 1 by Deputy Moss. It is alleged that Moon tried to flee from Deputy Moss and Deputy Mike “Doc” Smith.

Violation of Probation 3rd Offense: Served on Aug. 1. Moon was convicted of two counts of Driving On/With A Suspended License on July 12, 2011 and following his second revocation on May 8, 2012 his probation period was extended until March 15, 2012. Moon allegedly violated probation a third time by failing to report to his probation officer, testing positive for illegal drug use and failing to pay all costs, fines, supervision fees and restitution as directed.

In addition, Merced, of 7159 Gassaway Rd., Woodbury, was charged with False Report on Aug. 1 by Deputy McMillen. Merced told law enforcement officers that Moon was not at her residence at 1665 Sugar Tree Knob after obtaining permission to search the residence. Moon was found to be hiding in the bed. Bond was set at $3,500. Initial court date is Sept. 11.

Also, Joyce Leggett, 4150 Dolittle Rd., Woodbury, was charged with False Report on July 31 by Deputy Moss. It is alleged that on July 6, Leggett stated that Mandi Matthews was driving a vehicle involved in a crash when she (Leggett) knew that Benjamin Roberts was the driver. Bond was set at $3,500. Initial court date is Sept. 11.