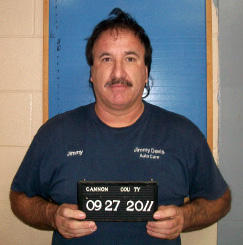 DAVIS
What began as a stolen property investigation by the Cannon County Sheriff's Department turned into a drug arrest last week.

Sheriff's Investigator Anthony Young said that deputies Brandon Gullett and Mike Smith went to 1027 Manustown Rd., Woodbury, on Sept. 27 after information was received there might be stolen property located at the address.

The deputies found a Yamaha 4-wheeler and part of a pickup truck at the location, both of which had been reported as stolen.

A search warrant was then obtained by Investigator Young and a search was conducted of the residence.

Investigator Young said components of a meth lab were found in the garage area of the home. Meth and marijuana were discovered in other areas of the home.

Following the search the homeowner, Jimmy Douglas Davis, Jr., was placed under arrest.

He was charged after warrants were obtained by the CCSD with the manufacture of methamphetamine, maintaining a dwelling for the purpose of manufacturing meth, possession of a Schedule II drug, possession of marijuana, possession of drug paraphernalia and theft over $1,000.

Also participating in the investigation were Sheriff Darrell Young and deputies Matthew Parsley and Seth Perry.