'The Secret Garden' to open at Arts Center 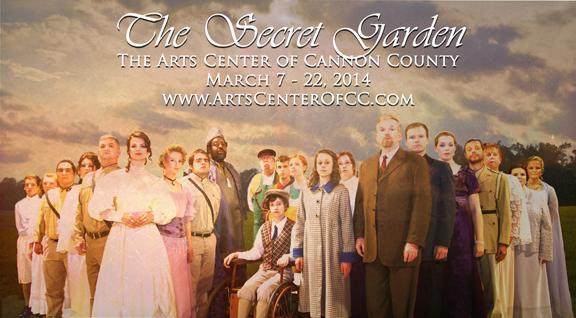 Based on the novel by Frances Burnett

Mary Lennox, (Mackenzie Turney) a young orphan, is sent to England to live with her reclusive uncle and sickly cousin. When this neglected child discovers an equally neglected garden, she begins to bring life (and a bit of magic) back to both the garden and her uncle’s manor. This lush Broadway musical won 3 Tony Awards, including “Best Score of a Musical”.

This production will be on stage March 7-22, 2014 at the Arts Center of Cannon County, 1424 John Bragg Highway, Woodbury. TN 37190. Tickets are available online at artscenterofcc.com, and (subject to availability) at the door one hour prior to show time.


The Arts Center is located on 1424 John Bragg Highway, just west of the town of Woodbury, approximately 20 minutes from Murfreesboro, Manchester, and McMinnville and one hour southeast of Nashville. Office hours are 10:00a.m. to 4:00p.m., Tuesday through Saturday. For more information call 615-563-(ARTS) 2787. Check out our web site at www.artscenterofcc.com.