The Cantrells to appear at Arts Center 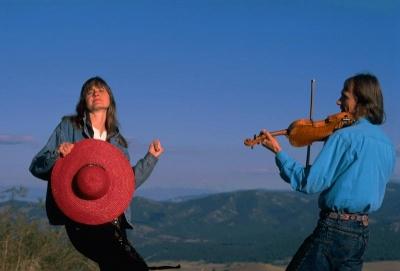 The Arts Center of Cannon County presents
The Cantrells
"an all acoustic treat"
Thursday, March 20 at 7:30 p.m.

National public radio favorites The Cantrells will bring their "hot picking and smooth harmonizing" to the Arts Center stage on Thursday, March 20 at 7:30 p.m.

Al and Emily Cantrell cast a magical spell with their airy, joyful acoustic songs. Emily uses her voice as an instrument on soaring vocals like a country Joni Mitchell, while Al plays off her Martin guitar with spirited fiddling and a dazzling mandolin technique. The duo puts a pop spin on acoustic folk and bluegrass music, with occasional detours into Celtic, western swing and traditional American tunes.

The Cantrells have been featured on Mountain Stage, Riders Radio Theater, Folk Sampler, E-Town and River City Folk, as well as numerous other nationally syndicated radio programs. Their four critically acclaimed albums are on radio playlist worldwide and include the talents of Bela Fleck, Jerry Douglas, Tim O'Brien and Riders in the Sky. Robert Redford hand-picked them to play old-time music on-screen in his hit move A River Runs Through It.

Ticket prices are $15 for adults, $13 for seniors and students. The Arts Center is located on 1424 John Bragg Highway, just west of the town of Woodbury, approximately 20 minutes from Murfreesboro, Manchester, and McMinnville and one hour southeast of Nashville. Office hours are 10 a.m. to 4 p.m., Monday through Saturday. For reservations or more information check our website at www.artscenterofcc.com or call 615-563-(ARTS) 2787 or 1-800-235-9073.