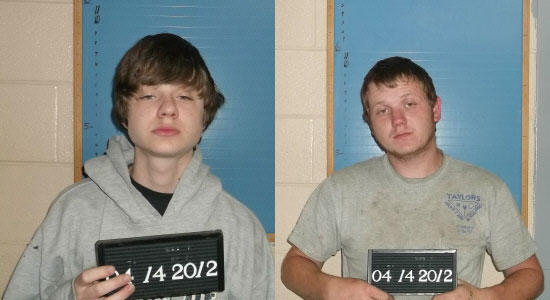 Two young Watertown men were recently arrested following a traffic stop during which a Woodbury Police officer detected a distinct odor which he could only describe as “funk” coming from their vehicle.

While speaking with Hardin, Officer Fesmire noted an odor coming from the vehicle. Hardin said he had not had anything to drink or taken any medication. A check of the status of his driver’s license showed it to be suspended.

The officer had Hardin exit his vehicle. At that point he could detect a strong odor of an alcoholic beverage coming from Hardin, who admitted to drinking a beer a few hours earlier. Officer Fesmire had Hardin perform a series of field sobriety tests, to which he performed poorly, according to the officer’s assessment.

Hardin was placed under arrest for DWI.

Patrolman John House, who had arrived at the scene, asked Taylor to step out of the vehicle. When he did, Officer House observed multiple marijuana seeds where he had been sitting. He also found approximately a gram of marijuana in the arm rest/door handle where Taylor was sitting. Taylor said he was on probation in DeKalb County for drugs. He denied ownership of the marijuana.

Officer House searched the vehicle and found a muscle relaxer in Hardin’s seat, several Oxycodone pills, a partially consumed Budweiser and some unopened beer bottles. Several more bottles of beer were found in a cooler in the trunk.