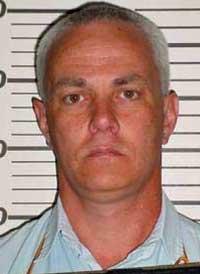 NASHVILLE - This afternoon at approximately 5:00 p.m., a Special Agent with TBI’s Drug Investigation Division shot a suspect while trying to serve a failure to appear warrant on him on Thomas Road in Cookeville.

The suspect, who was shot once in the arm, is 46-year-old Michael Lynn Horn, last known address 1258 East Piney, Dickson, TN. Five agents were attempting to serve a failure to appear warrant for a March 2010 DUI arrest, when Horn attempted to run over one of the agents. The agent fired his weapon shooting Horn once in the arm. He is being treated at the Cookeville Regional Medical Center and is expected to be okay.

Horn is a suspect in the death of Cynthia Crabtree of Putnam County, TN. Crabtree’s decomposed body was found just off Grant Highway in Smith County, TN on May 28, 2010. She was reported missing on May 21, 2010 and was last seen on May 18, 2010 traveling to Nashville, TN with an unknown male.

He has a criminal history in both Dickson and Putnam Counties that dates back to 1987 and includes attempted first degree murder, aggravated kidnapping, aggravated assault, drug charges, theft, reckless endangerment with a deadly weapon and worthless checks. He was convicted in 1991 of attempted rape and is considered a violent sex offender who is required to register for life.

Agents are currently in the process of determining charges against Horn for trying to run over the agent with his vehicle.

The agent involved in the shooting is on routine administrative leave pending the outcome of the investigation. His identity and picture are not being released since he works as a drug agent. Supervisors in TBI’s Criminal Investigation Division are handling the investigation.