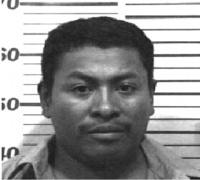 Nashville, Tenn. – The Tennessee Bureau of Investigation has put a McMinnville, Tenn. man on the state’s Top Ten Most Wanted List after law enforcement obtained a murder warrant for his arrest and he has not been located. A reward is being offered for information leading to his arrest.

Gregorio Rosas Arenas, 35, last known address 1350 Viola Road, McMinnville, Tenn., is wanted for criminal homicide for the June 20, 2012 fatal shooting of  29-year-old Albertano Guerrero Trejo. According to witnesses, Trejo was inside his apartment on 129 Cascade Avenue in McMinnville when Arenas came to the door, an argument erupted and Trejo was shot and killed. Arenas has a criminal history that includes driving on a suspended license and has received multiple traffic citations. His bond has been set at $1,000,000.

Arenas is described as a Hispanic male with black hair and brown eyes. He is 5’3” and weighs approximately 122 lbs. He was last seen driving a red Pontiac with Tennessee tag 555JPH that belongs to a different vehicle and may be in possession of the victim’s personal identification. Arenas should be considered armed and dangerous and approached with caution. Anyone with information on the whereabouts of Gregorio Rosas Arenas is urged to call the TBI at 1-800-TBI-FIND. There is a $1,000 reward for information leading to his arrest.