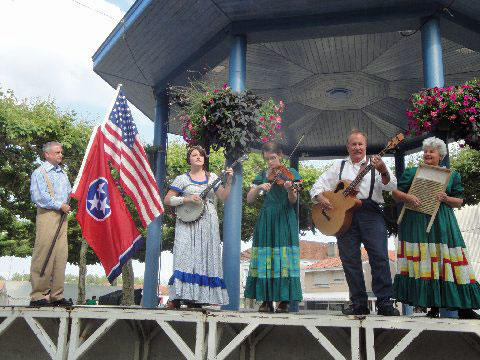 Tara Syester, of the Iconium Community of Cannon County, second from left with her banjo, is shown with the Cripple Creek Cloggers' delegation now representing the U.S. in international folkloric festivals in Morcenx and LaReole, France.

Their performances range from participating in masses in special church services, to concert shows, to informal music presented in area cafes, to playing and parading in the streets.

There are also jam sessions with local musicians and those from other countries participating in the festivals.

Their 17 day tour is only part of the work of Cripple Creek Cloggers, organized at Kittrell School in 1967, by their current Director, Steve Cates.

They meet Tuesday nights at 7 in facilities of the First Baptist Church of Murfreesboro, 200 E. Main Street 37130 for teaching and organizing performances, tours and workshops. They have also, since 1982, hosted international Folkfest and will again during June 10-17, 2012.