Swing Made Of Rare Wood Presented To Executive Residence 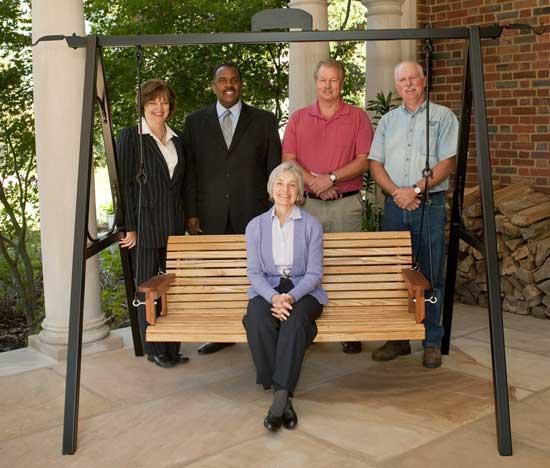 A swing made of rare American Chestnut wood was recently presented to Tennessee’s Executive Residence. Attending the presentation at the Residence are (standing, left to right): Kathleen Williams, executive director of the Tennessee Parks and Greenways Foundation; Barry Scott, Commission member for the Tennessee Arts Commission; Earl Conaster, who built the wood  swing; and Joe Brown, who designed and fabricated the metal frame. Seated in the swing is First Lady Andrea Conte. (Photo: State of Tennessee Photographic Services)

NASHVILLE — A swing made of rare American Chestnut wood was recently presented to Tennessee’s Executive Residence as a gift.  Earl Conaster, an employee at Edgar Evins State Park created the swing, with Cannon County blacksmith Joe Brown crafting the frame.

The swing was presented to First Lady Andrea Conte on October 20 by Kathleen Williams, executive director of the Tennessee Parks and Greenways Foundation.

During a hike early in 2010, Cannon resident and past-president of the TN Trails Association, Fount Bertram mentioned to Neal Appelbaum that four chestnut swings had been crafted as a fundraiser for Edgar Evins State Park.

Appelbaum  purchased the remaining swing gifting it to the TN Parks and Greenways Foundation with hopes that the swing would make its way to the Governor's Residence. Rich Boyd, Director of the State Arts Commission, facilitated the installation of the swing at the Residence.

Attending the presentation, along with the First Lady, were Rich Boyd, executive director of the Tennessee Arts Commission, and Julie Horn, director of visual arts, craft, and media for the Commission.

“I want to thank Mr. Conaster, Mr. Brown and the Tennessee Parks and Greenways Foundation for this unique and beautiful gift to the Tennessee Residence,” said First Lady Andrea Conte.  “It fits in perfectly with the repurposing of natural resources from across the state that has become an integral part of the Residence renovation and the construction of Conservation Hall.”

“Future Tennessee Governors will sit down at the mansion to rest in the arms of the old Chestnut and Cherry trees crafted into this handmade swing,” says Williams.

The story is essentially “a tale of two trees” in Edgar Evins State Park.

In 2003, some branches on a Black Cherry tree were dying. The tree had to be removed for safety reasons in 2005. In 2003, an American Chestnut tree was discovered in the park. This tree eventually succumbed to the blight that decimated the American Chestnut population.  When the tree was cut in 2007, the Chestnut lumber was used to make the slats in the porch swing.

“Both of these trees were majestic, and it was sad to lose them, but their legacy lives on in this porch swing,” said Carl Halfacre, park manager at Edgar Evins State Park.

Four swings were made and were originally marketed through the neighboring Appalachian Center for Craft.  The swing at the Tennessee Executive residence is signed and numbered one. The other swings were sold to out-of-state buyers.