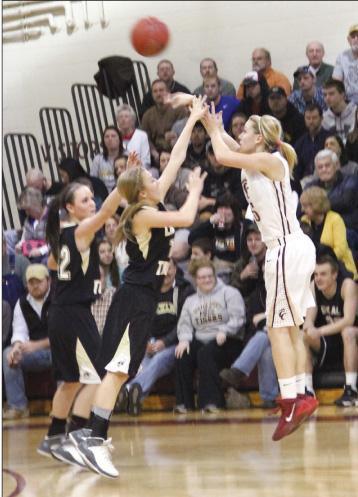 Unless their paths cross in the postseason, Cannon County’s seniors capped a perfect career against rival DeKalb County at Robert A. Harris Gymnasium Friday (Jan. 24).

Three seniors - Abbey Sissom, Madison Walkup and Rebekah Faulkner - led the Lionettes in scoring as No. 3 Cannon County stormed to a 75-41 win and maintained its lead in the District 8-AA race. The Lionettes (24-2, 9-1) have a two-game lead with four games remaining.

The Lionette senior class, which also includes Macy Clements and Taylor Warren, is 10-0 against DeKalb County.
It also marked the 39th consecutive win for Cannon County against DeKalb.

“You never take anything for granted in this rivalry,” said Sissom, who started in all 10 wins against DeKalb County during her career. “This was possibly the last time we would play DeKalb so we wanted to come out ready to play and make sure we ended on a good note against them.”

In the event they don’t meet again, Sissom left the Lady Tigers and their fans a performance to remember.
The blonde bomber misfired on her first 3-point attempt and proceeded to bury seven straight. She finished with 29 points on 10-of-14 shooting from the field, including 7-of-8 from 3-point range. She also dished out nine assists and collected five steals.

It was one of Sissom’s most complete games in a season filled with several memorable ones.
Sissom wasn’t the only standout as the Lionettes won their ninth straight overall.

Faulkner also made a statement. The senior forward narrowly missed a double double with 13 points (on 6-of-9 shooting) and seven rebounds.

The Lionettes blistered the nets, shooting 27-of-53 (51 percent) from the field. Remarkably, they shot even better from beyond the arc where they connected on 53 percent (9-of-17) of their attempts.

“We have been shooting the ball well but this was a solid effort,” Lionettes veteran head coach Michael Dodgen said. “Abbey was really shooting it well and that was infectious. It was a good win for the kids and it was a big district win.”

Unlike the earlier contest at DeKalb County, Cannon County took control of the game early and never let up.
The Lionettes came out with the hot hand and built a 19-10 first-quarter lead on 7-of-11 shooting.
It was a preview of what was to come.

“Everyone was shooting well and we were getting some good looks,” Walkup said. “We scored a lot off of our defense as we were able to create some opportunities there, but we also had a good shooting night.”

High-scoring games have been the norm for the Lionettes this season. Their 69-point per game average is third highest in the state regardless of classification. Only Cumberland County and Morristown West average more.
During their current nine-game winning streak the Lionettes are averaging 71 points per game. They have scored 61 or more in all nine, including score more than 70 four times.

While the offense has been lighting up the scoreboard, the Lionettes are not taking a break defensively. They are holding opponents to 44 points per game during the win streak.

“We take pride in our defense,” Faulkner said. “If we can control the boards and play solid defense we always have a chance.”

All facets of championship-caliber basketball were on display against DeKalb County.