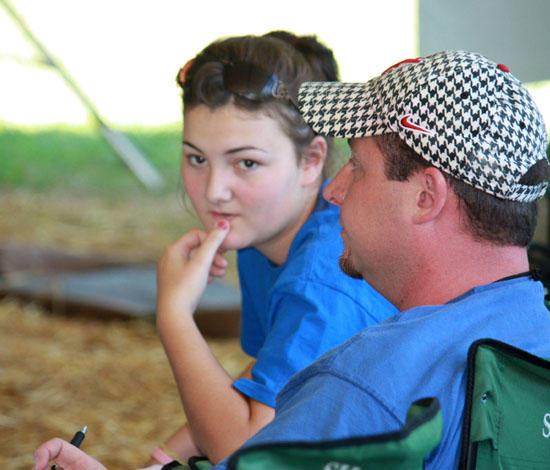 Jami Averwater of Eagleville, the student producer/stage manager of The Webb School's student production of 'Macbeth,' ponders a scene during rehearsals last week. Show director Tee Quillin, former MTSU Theatre professor, is pictured as well.
A small group of students are putting their passion for theatre into action this summer at The Webb School in Bell Buckle.

Led by former MTSU Assistant Professor of Theatre Tee Quillin, the high school students have been rehearsing daily since early-June for a one-time July 8 showing of William Shakespeare’s tragedy “Macbeth.”

“It’s very Elizabethan in its development,” said Quillin, referring to the manner in which actors and minstrels in Shakespeare’s time would travel from town to town, rehearse, build a set and gather props, all in a few weeks time.

“We have about two weeks more than they typically had,” he said.

According to Webb’s Theatre Director Ruth Cordell, it was the students who initiated the Shakespeare Camp.

“The kids got together, raised the money and made it happen,” she said.

Cordell is overseeing the camp, which is operating in conjunction with the Tennessee Shakespeare Festival on The Webb School campus. The Festival features professional actors in a Tennessee version of Shakespeare’s “The Two Gentleman of Verona,” directed by TV and stage actor Lane Davies. For more information about the Festival visit www.tennesseeshakespearefestival.com.

The student production of “Macbeth” kicks off the Festival’s closing weekend, July 9-11.

According to Quillin, the cooperation of Davies and others involved in the Festival have been instrumental to the camp’s success.

“We’ve been given whatever we needed within reason,” he said. “The use of the set, rehearsal space, it’s been much easier than I originally thought it would be.”

The student actors have also benefited from the Festival.

Webb sophomore Jami Averwater of Eagleville, who is the producer/stage manager for “Macbeth,” said many of the student actors also volunteered to play bit roles in the Festival production.

“It’s a fantastic experience. We’ve met so many great actors,” she said.

Averwater may seem young to be producing a Shakespeare play, but according to Quillin, the job is a perfect fit.

“She’s definitely got a career in this if she wants it and I get the feeling she does,” he said.

For Averwater, attending meetings, managing people, coordinating schedules, doing paperwork and breaking down the script scene by scene has been enjoyable.

The job has also been a huge learning experience for the aspiring theatre professional.

“It’s a lot of responsibility,” Averwater said. “I’ve learned how to take things into my own hands and how to step back and not get so stressed about everything. …Tee (Quillin) has been a great mentor.”

According to Cordell, that’s just what the Webb Shakespeare Camp is all about.

“It goes back to the philosophy of treating students like professionals,” she said.

The one and only showing of “Macbeth” will be at 8 p.m. on Thursday, July 8 in the Tennessee Shakespeare Festival tent on The Webb School campus. The show is free and open to the public.

The Webb School is located at 319 Webb Road East (Hwy. 82) in Bell Buckle, Tenn. For more information about The Webb School visit www.thewebbschool.com.