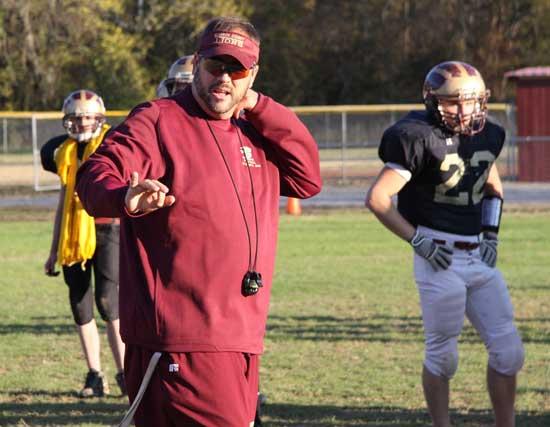 Cannon County Head Coach Joel Schrenk prepares the Lions for their game against Harpeth Friday. In addition to formations and plays, the CCHS coaching staff is working to keep the Lions mentally focused for the school's first playoff game in 14 years.
With eight of their 10 regular season opponents joining them in the TSSAA Playoffs, the Cannon County Lions may be more prepared than any other team in the state for postseason action.

The Lions will face Harpeth Friday night in the opening round of the playoffs at Cannon County High School. Game time is 7 p.m. Tickets are $8.

First-year Cannon County head coach Joel Schrenk admits he was a little concerned when he first saw this year's schedule, but now believes the strong slate has helped his team.

"I think it helps us in that we have played quality opponents all year long," Schrenk said this week. "When I first got here I was worried about our schedule because I knew it was vey tough. But in hindsight, it has made us better and I feel helped us win the district championship."

Cannon County overcame its tough schedule and a slow start to the season by winning five of its last six games and notching it first district title since 1978. The Lions will be making their first appearance in the TSSAA Playoffs since 1995 Friday night.

"You are always hopeful as a coach that you can win every game. I knew this would be a building process, and the quick buy in of the players has accelerated the process," Schrenk. "The players have done an outstanding job of doing what we asked of them and that has translated into victories, big victories."

After losing three of their first four games, the Lions were on the verge of another setback to York Institute when they turned the game, and eventually their season, around by rallying for a 20-14 victory.

"Halftime of the York game trailing 14-0, we had some seniors step up and show some leadership," Schrenk said. "That was one key to the run that we are making. And I think every time you win you gain confidence and right now our kids are playing with confidence. That is huge. They don't just hope to win, they expect to win."

Schrenk said he does not think that success, or the excitement generated throughout the community by it, will be a distraction for his Lions Friday.

"Not really, they seem to be handling it well, and we constantly remind them of where their focus should be," he said.

What the Lions see as they concentrate on the Indians is a team very much like itself. Harpeth enters averaging 24.4 points per game. Cannon County is scoring 24.2.

Cannon County is ranked No. 149 in the state by MaxPreps.com. Harpeth is in the ballpark at 177.

"They have really good skill players." Schrenk said. "No. 6 (wide receiver Perry Horkins) holds the state record for career TD's. No. 22 (running back Nathan Forest) is very athletic and fast. Both QB's are good."

Schrenk says the keys for the Lions against the Indians are: "We have to win the turnover battle, keep 6 and 22 in check. Offensively we have to move the chains and score."