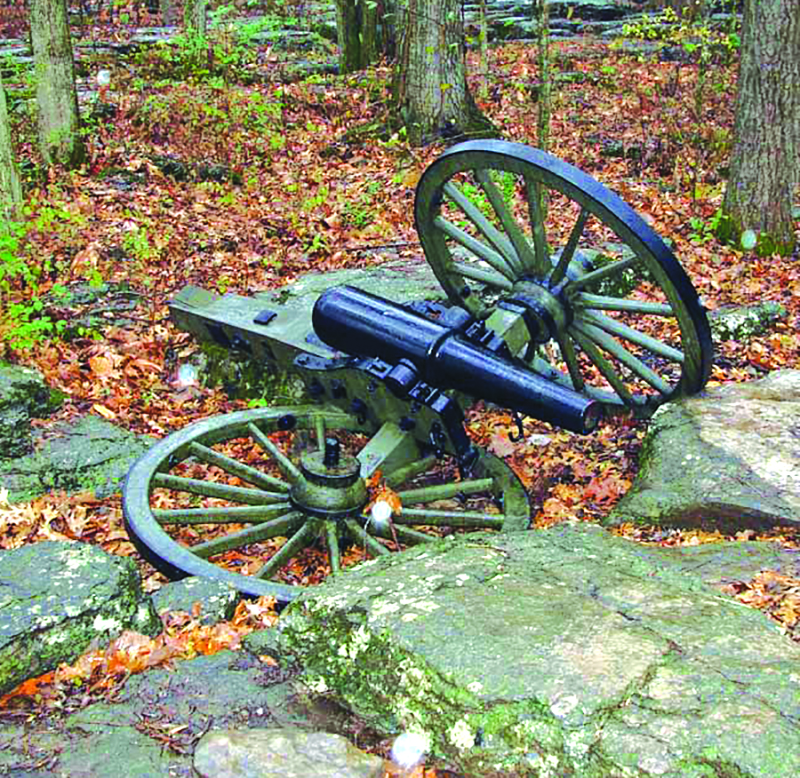 It was a bitterly cold New Year's Eve and the wounded from the Battle of Stones River were freezing to death.

Union Maj. Gen. William S. Rosecrans ordered that no fires were to be built. Many of the wounded were to die of exposure that frigid night.
Confederate Brig. Gen. William Preston had lost a third of his men attacking the Round Forest.

"The frost, the dead and dying and the dark cedars among which we bivouacked were wild enough for a banquet of ghouls," Preston wrote.
Harrowing stories followed the battle with Union and Confederate soldiers tending to their opponents' and own wounded whose moans and cries made the long night even more miserable.

Exhausted Federal and Rebel troops searched for the wounded and conducted burial parties. Col. William B. Hazen, risking sniper fire, looked for the body of his friend Col. Julius Garesché, who had been beheaded by a cannon ball near the Round Forest.

Not too far away, Confederate soldiers conducted a burial ceremony for a Union officer, Col. George W. Roberts, who had been killed leading Sheridan's 3rd brigade.

The Confederates from the 4th Tennessee scratched out a grave in the cedars and limestone outcroppings for Roberts, who had been the hero of the Union victory at Island No. 10. Maj. Luke W. Finlay, a Memphis lawyer, covered Roberts' body with his own cloak and conducted a brief service. A large, smooth stone with Robert's name chipped on it was placed over the grave.

Union soldiers, used to regular meals, had lost most of their supplies during Confederate cavalryman Joe Wheeler's raid on their supply lines and were making do with scant rations including horse meat.

While they suffered, Rosecrans and his generals met to determine their next course of action.

Confederate commander Maj. Gen. Braxton Bragg was confident the Union army would retreat. In Murfreesboro, he ordered all churches and public buildings converted into hospitals.

In his mood of triumph, Bragg threw victory away.

After some discussion of retreat, the Union Army of the Cumberland was ready to fight. There was some indication Rosecrans felt his army was surrounded and he had no choice.

On New Year's Day, the Army of Tennessee rested. The only action was to move Col. Joseph B. Palmer's Murfreesboro troops back across Stones River.
But Rosecrans acted decisively, ordering Gen. T.L. Crittenden to take the high ground overlooking McFadden's Ford on Stones River. That move made the difference on the second day of Stones River.

Supplies began to trickle in, and the Army of Cumberland began to strengthen its lines.

As the morning of Jan. 2, 1863 dawned cold and gray, Bragg saw Rosecrans wasn't going to fade away and that a sharp, decisive movement would be necessary to force the Union troops back to Nashville.

The delay had made Union lines along the railroad and in the Round Forest virtually impenetrable. The soldiers were well dug-in, and artillery was placed to rake the open fields with cannon fire.

Bragg knew that the only untested part of the Union line was its left flank on the east bank of Stones River and said his army needed to push them back and gain control of the high ground taken by Crittenden. From that position, Confederate artillery could easily bombard Union positions.

Bragg ordered Maj. Gen. John C. Breckinridge to attack and told the former vice president of the United States he could pick the time. By this time, the two generals had a history of quarreling. On the first day of Stones River, Breckinridge failed to respond to orders and had delayed sending reinforcements until late in the afternoon.

After hearing Bragg's plan, Breckinridge conducted his own surveillance of the Federal position and came to the conclusion that the terrain across the river was masking a strong force. And the delay he was creating was allowing that position to be reinforced.

Bragg called Breckinridge to his headquarters at noon on Jan. 2. Under a huge sycamore at the river's edge (near the current Bragg Trailhead on Murfreesboro's Greenway), Bragg explained his plan.

Growing angry, Breckinridge drew a map in the dirt showing how dislodging the Federal troops would push them into an even stronger position.
Bragg was not swayed by Breckinridge and ordered him to attack at 4 p.m., just an hour before dark.

Returning to his corps, Breckinridge stirred them into action, which didn't escape already suspicious Union eyes. Col. Samuel Beatty had been keeping Crittenden and other superiors informed. And it appeared for a period that the Confederates were preparing to attack the Round Forest once again.

Gen. Leonidas Polk had moved five Confederate batteries below the Round Forest shortly after daybreak on Jan. 2 and opened fire at 8 a.m. The Union Chicago Board of Trade battery was repositioned in what is now the southeast corner of the National Cemetery and ordered to return fire. They mistakenly fired on an Ohio battery in the confusion. For whatever reason, the Confederate salvo just lasted 30 minutes.

Meanwhile Beatty's lines on the left side of the river are being reinforced with infantry and artillery.

Miller's, Stanley's, Cruft's and the powerful Pioneer Brigade were moved up along with the 7th Indiana, Battery F of the 1st Ohio, and Capt. Charles Parson's U.S. Regular Army Battery were lined up on the west bank of the river.

At 3 p.m., Breckinridge was pulling his troops together. A cold rain turned into sleet. First in line was Breckinridge's 1st Kentucky, the Orphan Brigade, led by Brig. Gen. Roger Hanson and Benjamin Hardin Helm. President Abraham Lincoln was Helm's brother in law.
Hanson, called 'Old Flintlock' by his men, limped from a wound from a duel that had happened years before. He had just been promoted to brigadier general two weeks before.

Brig. Gen. Daniel Adams' Brigade of Louisiana and Alabama group was placed behind the Kentuckians.

Col. Randall Gibson was leading them because Adams was wounded during the first day's fighting.

Then there was Gen. Gideon Pillow. The opportunistic, incompetent and generally hated Pillow had shown up on the battlefield only an hour earlier. Bragg immediately gave him a brigade command in Breckinridge's division.... Col. J.B. Palmer's brigade.

Palmer, Murfreesboro's former mayor, was given the option of withdrawing from the field. He instead resumed command of his original regiment, the 18th Tennessee.

The Tennesseans were to be on the Confederate right on the front line of the assault, a serious mistake with Pillow in command. Brig. Gen. William Preston's four regiments were to follow Pillow but had to return from their position near the Round Forest.

Hanson was enraged when he first heard Bragg's orders: load, fix bayonets and advance within 100 yards of the Union position before opening fire and charging them with bayonets. The Rebels had to move through 700 to 900 yards of open territory.

Hanson said Bragg's order was nothing but murder. He had to be physically restrained from killing Bragg himself.
At 4 p.m. a single cannon shot announced the attack.

The Confederates were immediately under attack from Union artillery. Aerial bursts mowed down large clusters of troops, but the Kentuckians continued to advance on the silent Union infantry, which rose to fire volleys at 90 and 60 yards. With Hanson leading the way, the Confederates took the hill at the cost of their commander's life. Hanson was hit by a shell fragment in his leg and quickly bled to death.

Breckinridge himself tried to stop the bleeding while still under fire.

Meanwhile, Pillow was hiding behind a tree. Breckinridge ordered him forward with a blast of obscenities. Pillow's brigade, with Palmer at the head of his regiment, was heavily involved with two Indiana brigades. In the confusion and heavy fire, the Confederate advance slowed, but some of the Union troops continued to fall back.

Rosecrans, once again directly involved in the action, scouted for units to bolster the Federal line. He discovered Brig. Gen. William Carlin's brigade and sent them to the river.

"I beg you for the sake of the country and my own sake to go at them with all your right," Rosecrans told Carlin.

But Capt. John Mendenhall, acting upon Crittenden's orders, was to be the hero of the day. He quickly gathered artillery to join the 7th Indiana artillery, which was already firing from the hill overlooking McFadden's Ford on Stones River. Soon the Chicago Board of Trade and other units gathered on the hill.
By 4:45 p.m., Mendenhall had grouped 40 (for a total of 58) more cannons on the hill that overlooked all of the surrounding territory and arranged them in a way they all had an unimpeded field of fire.

They were ready to fire en mass when the Confederates crested the hill overlooking the ford in pursuit of retreating Union troops.
"In a moment's time it was as if the Rebs had opened the door of hell to be greeted by the devil himself," wrote Dr. Bob Womack in his "Call Forth the Mighty Men."

"If a soldier ever saw the lightning and heard the thunder bolts of a tornado, at the same time the heavens opened and the stars of destruction were sweeping everything from the face of the earth, if he was in this battle he saw it," wrote W.J. McMurray of the 20th Tennessee.

More than 1,800 Confederates were mowed down in less than an hour. Stones River, at McFadden's Ford, ran red from their blood.

The Battle of Stones River was over. All was left was the Confederate retreat and the finger pointing of blame.