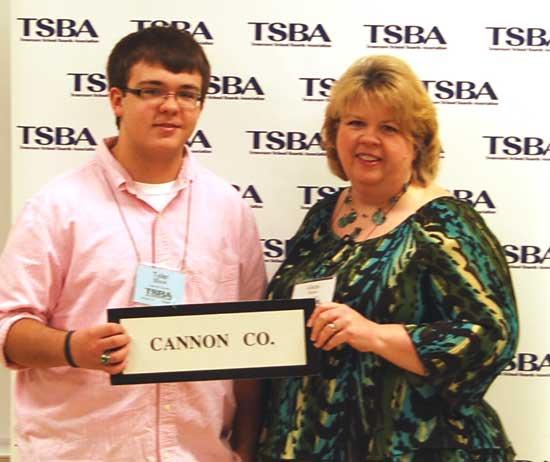 Tyler Stone, a junior at CCHS, attended SCOPE accompanied by his chaperone and mother, Greta Stone of Woodbury.
A student from Cannon County High School joined approximately 400 of his high school peers in Nashville on March 11 to express their views on public education in Tennessee at the Tennessee School Boards Association (TSBA) Student Congress on Policies in Education (SCOPE).

The event took place on the Avon Williams Campus of Tennessee State University.

Attending from Cannon County High School  was Tyler Stone. Now in its 29th year, SCOPE is designed to give students a voice where public education issues are concerned and to involve young people in finding solutions to the topics that are discussed.

Students then chose speakers to represent each of their 16 small groups who went on to take part in full-scale debates on current education issues. This year’s four debate topics were:

1. Homeschoolers shall be allowed to participate in public school extracurricular activities.

2. Virtual Classes/Distance Learning shall only be offered for Advanced Placement and Elective courses.

3. All textbooks shall be provided electronically.

4. Social networking sites such as Facebook, Twitter and MySpace, shall be used as a resource in the classroom.

Following the debates, all participants voted to support or oppose the debate issues and other relevant topics. The results of that student input will be shared with school board members, key legislators, and Dept. of Education officials.

During the past 29 years, the congress has addressed a variety of topics including the use of cell phones during school, alternative calendars, random drug testing, funding of the arts, student discipline, crime and violence in schools, curriculum, social problems, and academic and behavioral standards.

SCOPE participants were chosen by their local school systems, and many are active in student government.

The Tennessee School Boards Association was organized in 1939 to provide a united voice in education for local public school boards. In 1953, the State Legislature officially recognized TSBA as the “organization and representative agency of the members of school boards in Tennessee.”

The Tennessee School Boards Association is a service organization to all the state’s school boards. It serves as an advocate for the interests of Tennessee’s public school students and school districts and provides in-service training and assistance for the state’s more than 950 board of education members.