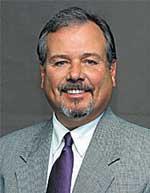 In reality, however, the Courier will continue to be "owned" by the people of Cannon County that it has been proud to serve for 125 years, Fryar said.

"Without the support of the community and its readers, no newspaper can be a success," Fryar said. "One of the reasons I purchased the Courier is because I am aware of the tremendous relationship the paper has had with its readers during Andy's time as publisher.

Fryar said he will work hard to maintain and build upon the trust and faith the newspaper has enjoyed in the community.

"We do not plan on making any radical changes," Fryar said. "We will continue to put strong emphasis on local news, local people, local government, local schools and local business."

Fryar said he has been looking at the possibility of purchasing the Courier for several years.

"I first talked with Andy and Patricia (Bryson) in early 2006. Having had a strong relationship with Andy for nearly 20 years by printing the Courier at The Daily News Journal plant in Murfreesboro, I became familiar with Woodbury and the Cannon Courier," Fryar said.

that affect the citizens of Cannon County," Fryar added. "Non suburban/metro newspapers dedicated to covering the local news of education, government, sports, community events and features have a strong and bright future."

Fryar, who has worked with over two dozen community newspaper during his career, says the strengths of the Courier are "its dedication to local news, market coverage/penetration, location and a strong staff that sets it apart from other newspapers I've worked with."

Fryar said because of the solid foundation the Courier has built over the past 125 years, any changes to the newspaper in the future will be relatively modest in nature.

"We plan to continue to report the local community news of Cannon County and actually expand local coverage in education, sports, business and people feature news. A re-design of the paper is planned with the inclusion of process color, reduction in web width, and

reorganization of the content. The Courier is an excellent example of a local community newspaper and any changes planned will be to improve on the existing content and appearance," he said.

"A local newspaper needs to be an advocate for the community it serves," he said. "Chronicling the history of the area, reflecting the values of the citizens it serves and providing information the public needs to know. It is relatively easy if you give the people what the want and attempt to tell them what they need to know."

Currently living and having worked in Warren County for many years, and in Rutherford County, Fryar said he has well-established fondness for the Cannon County community.

"I'm impressed with the friendliness of the people of Cannon County and what I see as a very bright future. It is nestled not far removed from the geographic center of the state of Tennessee, Middle ennessee State University. The local businesses support each other and the community and so will this newspaper," he said.

One change readers and advertisers will notice immediately, Fryar said, is the addition of a Web site for the Courier.

"The Courier will definitely have a strong presence on the World Wide Web and the internet site will be used to update information and news that happens between issues of the paper. It will be a very complimentary site to the Courier," he said.

Fryar said he is looking forward with great anticipation to his new role as publisher of the Courier.

"Introducing myself and meeting with the merchants and leaders of Cannon County as soon as possible will be my first priority," he said. "Pacing myself to not try to do too much to quickly has always been a challenge for me and I don't see it being any different now."

In addition to serving as publisher of several area newspapers, including The Southern Standard of McMinnville and The Daily News Journal of Murfreesboro, Fryar has been Vice President of Operations for American Hometown Publishing and Regional vice president,

Tennessee Morris Multi-Media Inc. He is a 1973 graduate of Middle Tennessee State University.