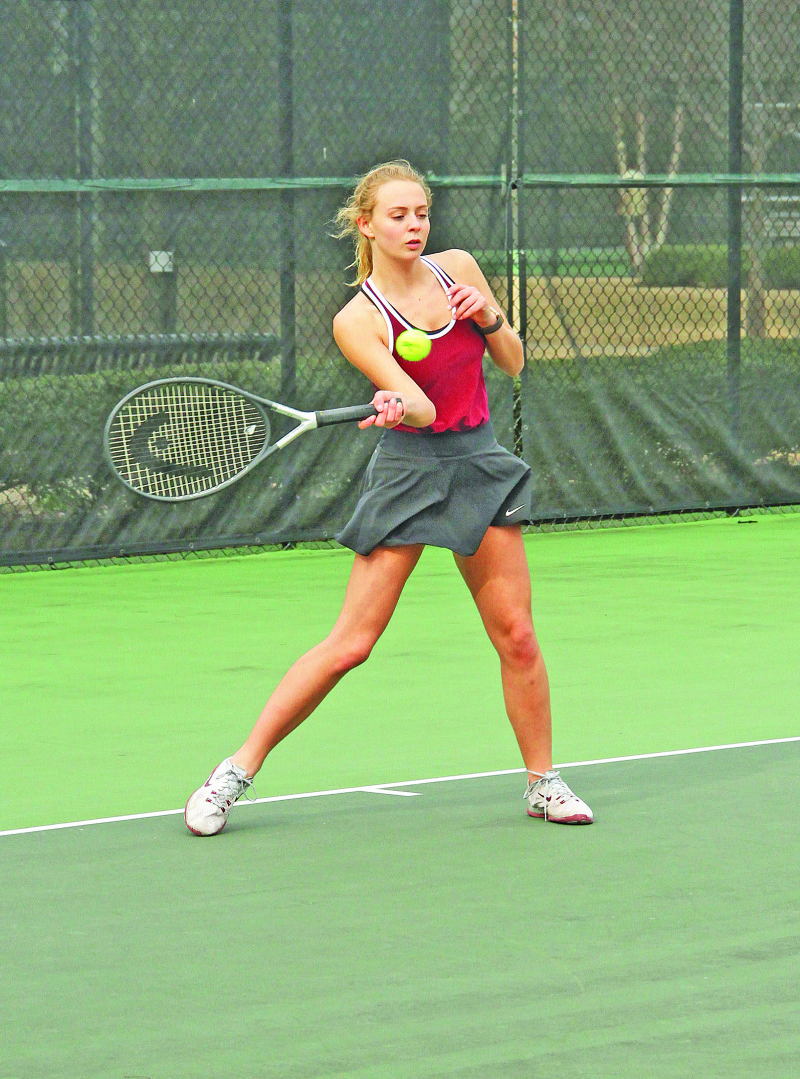 Alli Howard returning a ball in the #1 singles match against Central Magnet.

The weather outside finally feels like spring, and Cannon County sports are in full bloom as the first full week of action took place last week.
Both the Lions and Lionettes enjoyed mixed results in their home openers.

CCHS Boys Soccer
During the offseason, the Lions added some scoring punch to go along with the senior mainstays, including Justin Hill, Qwentin McMackins and the Walkup twins, Jake and Josh. After two matches on the pitch, the Lions have already scored a combined seven goals, and they headed into the spring break 1-1 on the young season.
CCHS opened 2017 at home against Warren County on March 13 in a cold, wet and windy playing environment. The Lions got goals from McMackins, new foreign exchange student senior Filippo Anese, Josh Walkup and Hayden Sanders, but it was not enough as they fell to the Pioneers, 5-4.
One week later March 20, the temperature was much warmer, but weather played a factor in this home match, too this time against Jackson County. The Lions were without key seniors Anese and goalkeeper Hill, but sophomore Camden Davis and senior Jake Walkup stepped in at the net. They almost combined on a clean sheet, but Davis gave up a goal off his hands with 5:03 left in the opening half, which tied the score at 1-1.
Earlier in the match, Jake Walkup moved the ball from his defender position, while Davis was in goal, and he put it past the Blue Devil keeper with 18:38 left in the opening half to give the Lions a 1-nil advantage.
McMackins, who was doubled teamed throughout the match, since Anese was not there because of a foreign exchange trip, finally put one in the back of the net with less than a minute left in the first half to make the score at the break, 2-1 Lions.
Junior Dalton Evans put the match away with 39:12 left in the second half with a header off an accurate Lions corner kick. The match was stopped at the 34:30 mark, because of lighting in the area at 7:03 p.m. After a TSSAA mandated 30-minute delay, the storm never let up and the head referee called it over at that point with the Lions picking up their first positive result of the season.
"I am proud of our team for the win," CCHS head coach Jeran Tenpenny said. "We did not start the season like we wanted with a win against Warren County, so we are glad to pick up the first win. Our guys did not come out with a lot of effort and intensity early in the game, so we talked about it at the half. We were able to put up a couple of goals despite the fact, we were not playing to our full potential. Then we come out in the second half, but it got called quick. I felt like our effort and intensity was a whole lot better in that second half early on, I just wish we could have played the rest of the game to see what we could have done with that same effort we had in the second half."


CCHS Baseball
Weather also played a factor in the Lions home opener on March 13 against Sequatchie County as they fell behind 8-0 after four innings, but the game was stopped and both coaches declared it a couple of days later no contest, and it will not be made up.
A night later, the game at Moore County was never started also, because of weather. So, the first official game of the 2017 season was at home on March 18 against Whitwell.
Lions starting pitcher senior Chandler Todd was locked in a pitcher's duel with the Whitwell starter, and the Lions took advantage in the bottom of the second when sophomore Charlie Parrish singled to right to lead off the CCHS at bat. He was then pitch run by senior Caleb Sissom. Sissom later scored on a Whitwell error to give the Lions a 1-0 advantage.
However, in the top of the sixth, Whitwell finally pieced together three doubles in a row off Todd, which scored both runs as it put the Lions down, 2-1.
In the bottom half of the sixth, senior Sam Scheu sent a shot to deep left, but it was caught at the warning track by Whitwell. It was the last best chance for the Lions as they were shut down the rest of the way by the Whitwell closer to end the game losing 2-1.


CCHS Softball
The Lionettes season opener was also plagued by weather delay as their games on March 13 vs. DeKalb County and March 14 at White County was postponed because of it.
Their season finally opened on March 16 at home against district rival Murfreesboro Central Magnet. It was also the first game under the controls on new co-head coaches Emily and Phillip Mullins.
However, the Lionettes were shut down by the Lady Tigers defense as they only allowed one Lionettes hit, a double by junior centerfielder Allie St. John. By the way, we at the Courier would like to apologize for leaving her off the season preview in last week's issue.
It was the only bright spot for the Lionettes, offensively, as they were run ruled 14-0 after five innings.

CCHS Tennis
The Lionettes opened the season on March 17 at MCMS, and they fell 7-0 to the Lady Tigers. Eight of the nine matches ended 8-0 in favor of MCMS, except Dani Waisanen lost her match in No. 3 singles 8-1.

CCMG baseball
After falling at Gordonsville 2-0 on March 9, the Junior Lions were back in action on March 17 in their home opener against DeKalb West. These two teams were supposed to play each other on March 7 at DWS, but it was postponed due to weather.
This game was a pitcher's duel as Junior Lions eighth grader Brady Bryson matched pitch for pitch with DWS. The Junior Lions got on the board first with two runs scored by Braxten Alexander and Brady Bryson in the bottom of the first.
However, DWS answered with two runs of their own in the top of the second, which tied the score at two, and they took the lead for good with a run in the top of the fifth to take the 3-2 lead.
Brady Bryson was replaced on the mound after that run by fellow eighth grader Zachary Basham, and he struck out the final eight DWS batters during the rest of the game.
The Junior Lions had a chance to tie the game in the bottom of the seventh, but seventh grader Garrett Basham was caught at the plate by DWS. The final two CCMG batters struck out to end the game as they fell to 0-2 on the young season, but their combined losses have been by three combined runs.