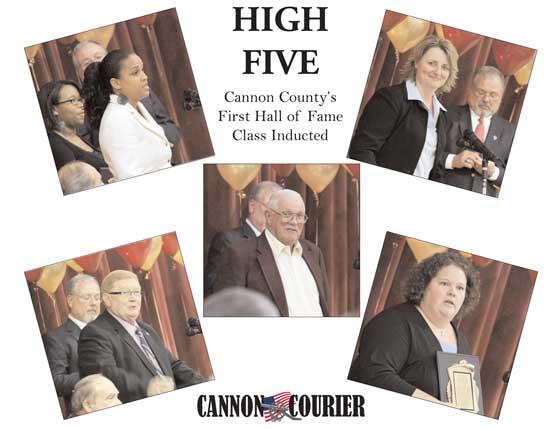 Cannon County has been blessed with many persons of Hall of Fame caliber and character through the decades.

Now this highly-successful sports county has an official Hall of Fame.

Close to 300 friends, family and supporters were on hand to welcome Steve Bullard, Annie Cox, Robert A. Harris, Julie Powell and Arna Smith into the Hall of Fame.

Additionally, Cannon County high school students were recognized for their outstanding sports achievements throughout the 2010-11 school year. The Cannon Courier named its Player of the Year in each of Cannon County's TSSAAsanctioned sports, as well as the Male and Female Athletes of the Year, Inspiration Award winner, Lions Award and the Publisher's Cup for the Female and Male Scholar-Athletes of the Year.

"By all accounts the first Hall of Fame and Sports Awards Banquet was a huge success," said Cannon
Courier owner and publisher William R. (Ron) Fryar. "The first class is outstanding and the student athletes produced great seasons throughout the year. There was truly greatness amongst us during this
banquet."

The following pages (download PDF edition at link below) offer a recap of the night's award winners. We hope you enjoy this keepsake edition as much as we enjoyed hosting this first-of-its-kind event for Cannon County.

Every invited student-athlete, Hall of Famer and Hall of Fame presenter was on hand and are featured in this section, along with legendary MTSU Head Women's Basketball Coach and Woodbury native Rick Insell.